Is It 'The End Of The Road' For KISS? 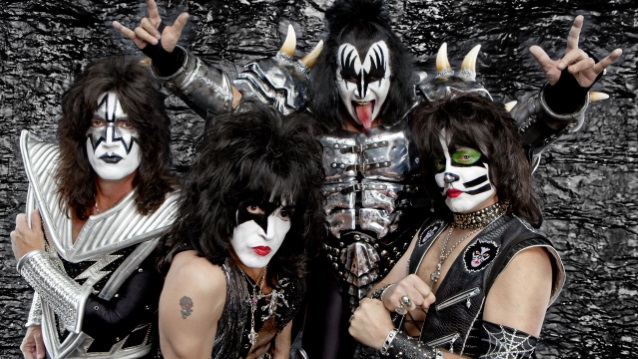 On February 8, Kiss Catalog Ltd., the owner of the intellectual property rights pertaining to the legendary rock group KISS, filed an application with the United States Patent and Trademark Office (USPTO) for the word mark "The End Of The Road". If granted, the registration will protect the use of the standard character mark of "The End Of The Road" on entertainment services, specifically "live performances by a musical band."

Word of the application has led to speculation among KISS fans that the band could be preparing to embark on its final tour.

KISS had once before publicly announced its plans to call it quits nearly 20 years ago. Guitarist/vocalist Paul Stanley later said that the band's tumultuous "Farewell Tour" in 2000 was nothing more than an attempt by the group to "put KISS out of its misery" after years of ego clashes and disagreements over songwriting credits between the band's original members.

"The 'Farewell Tour' was to get off the stage with our tails between our legs while we still had some self-respect left," bassist/vocalist Gene Simmons explained. "And it became very clear the fans didn't want us to go."

Simmons said in a 2017 interview that KISS had "a few more years" left before it would call it quits. He told Glasgow Live: "We're the hardest-working band in show business. I wear over forty pounds of studs and armor and all that stuff, seven-inch platform heels, spit fire and have to fly through the air and do all that stuff.

He continued: "In hindsight, it would have been smarter to be a U2 or THE [ROLLING] STONES, to wear some sneakers and a t-shirt and you're comfortable. No, we had to do it the hard way.

"So we're not gonna be able to do it into our 70s, and I'm 67 now. We'll do it for a few more years, and then when we think it's time to go, we'll go, and we'll do it the right way, with a big party. I'd like to think that we would do something that rocks the planet — something big and worldwide and maybe free."

Stanley has repeatedly said that the band could one day continue without him and Gene, explaining in an interview: "Once the original [KISS lineup] was no more, it just became clear to us that, in some ways, we're much more a sports team. We don't fall into the limitations of other bands, because we're not other bands. So, yeah, at some point, I'd love to see somebody in the band in my place, and it's because I love the band."