STRYPER - NEW ALBUM COMPLETE: "THIS IS OUR MOST DEFINED AND DYNAMIC ALBUM EVER" 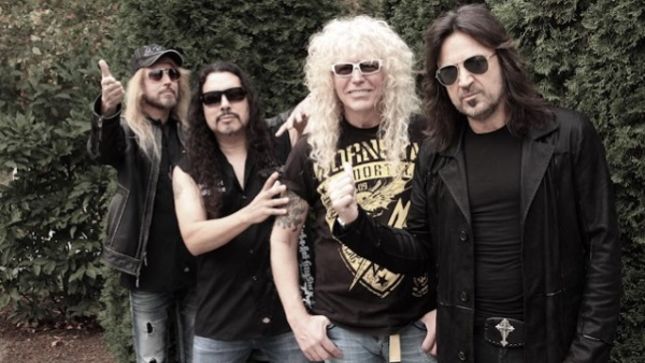 Stryper frontman Michael Sweet has checked in with the following update:

"The new Stryper album is our best to date. If this was 1987 (when rock and metal ruled the charts) we might have a Grammy waiting with our name on it. But since this is 2018, we're just happy knowing that our fans will love it. We are blessed. Can't wait to get this one into your ears!

Three things stand out to me on the new Stryper album:

#1 - Songs! They're edgy and heavy, yet memorable and catchy. And yes there's a ballad (rock/guitar ballad).

#2 - Clarity! We tried hard to make this our most defined and dynamic album ever. We didn't get into a "loud war" while mixing & mastering. Because of that it retained it transients and it really "breathes"

Jimmy Kay and Alan Dixon from Canada's The Metal Voice recently spoke with Sweet. He discussed the new Stryper album, a new song called "Take It To The Cross" that will feature death metal growls, new bassist Perry Richardson, faith, and the shooting of the upcoming Stryper documentary.

Sweet: "It's a valid question, to answer your question, no. And it might make people gasp, it might shock people, it might even lose a few fans by hearing Michael Sweet saying that. What is at the top of the priority list is that they are good people, that they are clean and sober and that they are really good musicians and for Stryper a really important piece is that they can sing. we are a vocal band. It's not easy to find somebody that can sing and that can play and that is a great person. "

"The Christan thing is that doesn't always make you a great person. Some of the biggest idiots I know claim to be Christian and then vice versa. Is it something that would be really great to see and have of course, it's funny cause Perry has said that he is a Christian. But we didn't go there."

On the musical direction of the new Stryper album

Sweet: "The new album comes out in late April 2018. I can tell you this this is Stryper's best album. There is a song that is close to Yahweh (from Fallen) and it's really different it will surprise a lot of people. The title of the album is very controversial and very shocking, it holds its own and perhaps surpasses To Hell With The Devil in terms of that catch phrase. There is a song called 'Take It To The Cross' and we brought in Matt Bachand, who plays guitar in Shadows Fall and also plays bass in Act Of Defiance, and Matt has a great growl voice. So we brought him in on 'Take It To The Cross'. People are going to hear that and say 'That's Stryper, no way!' More in line with thrash, death metal but not over the top. People are going to hear it and say WHAT THE HELL?"