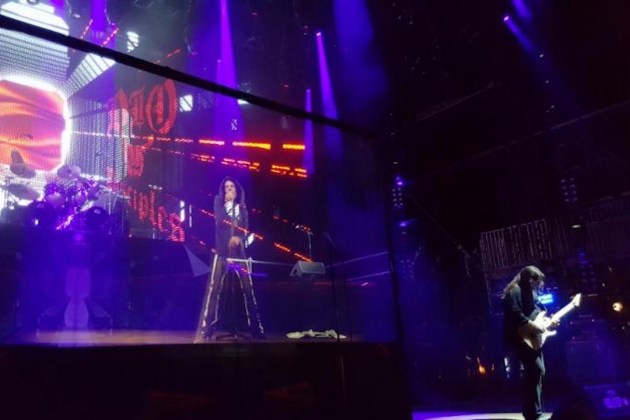 Jeff Pezzuti, CEO of the company that created the hologram for the Dio Disciples’ performance this summer at Wacken, said the concerts will showcase various eras of the legendary metal singer’s career.

“For the tour, he’s going to have different looks,” EyeIllusion’s Pezzuti tells Talking Metal. At Wacken, the hologram was built around Dio’s image from “somewhere around ’88, the Dream Evil era. For this next tour, we’re going to be somewhere later than that for certain songs and maybe earlier than that for other songs.”

No dates have yet been confirmed, though Pezzuti is already promising “an over-the-top, mind-blowing experience. We are going to have both live singers with Ripper Owens and Oni Logan as part of the show, as well as Ronnie appearing throughout the show at different parts, some duets. It’s going to be mind blowing from the fans’ perspective. We are going to bring album covers to life. We are going to bring things that are known to Ronnie to life onstage.”

Several key Dio songs will be staples in the setlist, Pezzuti confirms. “Ronnie will be involved in each show from probably six to seven songs a night that he will be singing on,” he said. “Some of the ones we can expect are ‘We Rock,’ ‘Holy Diver’ and ‘Rainbow in the Dark.'”

Dio’s widow Wendy has given the hologram her blessing. Dio Disciples also features guitarist Craig Goldy, drummer Simon Wright, bassist Bjorn Englen and keyboardist Scott Warren. Goldy had several different stints in Dio between 1986-2010. Wright, like Goldy, was part of the final incarnation of the band. Warren was in Dio from 1993–2010.