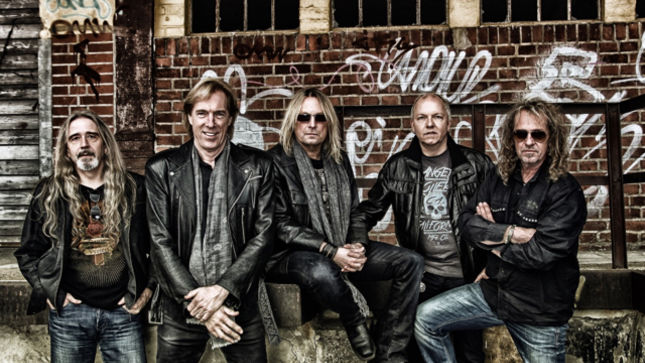 Phantom 5's self-titled debut album will be released on May 13th.

Phantom 5 is the new band put together by former Bonfire singer Claus Lessmann, together with producer and guitar player Michael Voss (Casanova, Bonfire, Mad Max, Michael Schenker). They have enlisted a sort of who’s who of German classic and melodic hard rock with a lineup completed by Robby Boebel (Frontline), Axel Kruse (Jaded Heart) and Francis Buchholz (Scorpions).

Born as Supremacy, this new German melodic rock alliance, with five real aces on the pitch, could not disappoint. So, after the name change to Phantom 5, the new album started to take shape.

According to Michael Voss, “For me it sounds like we did a follow up to the famous Bonfire Fireworks album with a touch of Frontline meets Jaded Heart groove… it is a driving monster with huge walls of guitars, powerful soaking drums and fine catchy melodies… we took a trip back into the world of the 80’s!”

Claus Lessmann adds, “I am very proud of being part of a very fine piece of melodic rock and I hope that many people will like and love it the same way we do. Everything came together very naturally and I had the feeling, that our flow of creativity never seemed to run dry, just like it should be. After the more than painful situation with Bonfire, it was exactly the right thing, at the right time to do for me and it just felt and feels so damn right!”

And indeed it’s been a long time since we’ve heard a melodic hard rock record this good coming from Germany! Think Bonfire’s Point Blank, Casanova’s debut album, Frontline’s Heroes, or Fair Warning’s debut record and you get an idea of how this is going to hit you. Get ready to push the play button very often. This record has everything you’d expect and more.

“They Won’t Come Back”

“We Both Had Our Time”