VINCE NEIL Compares Being On Stage To Driving At High Speed: 'It's Almost The Same Thing' 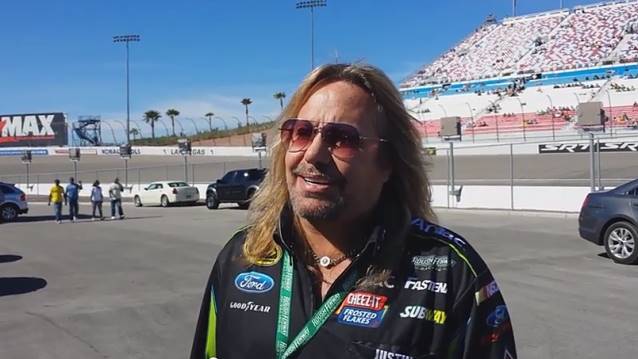 MÖTLEY CRÜE singer Vince Neil spoke to The Tampa Tribune about the band's decision to retire from the road after the completion of "The Final Tour", which ends in 2015.

"We certainly lived the life and it was all there on the albums," Neil said. "This is a brotherhood that has had its up and downs. There's no doubt about that. But I think there were many more good times in this band than bad."

He added: "You look at the drugs and drinking and it's amazing we're still here. We survived some dark days. We could have died many times from many different things. But we made it through it."

The 53-year-old Neil, who has a passion for auto racing, was asked what the difference is between singing before a packed house and driving at a ridiculously high speed on a track. "It's almost the same thing," he explained. "Being on stage in front of a big crowd is so exciting, and the same thing goes for flying around the track. Once you put your helmet on or hit the stage, you get focused and go out and have fun. You get that adrenaline rush. You can't believe how great you feel. I recommend it for everyone."

Neil told the Toronto Sun earlier this month: "I'll continue making music and going out on tour, so I don't see not touring as part of my life. I love to be out on the road and I love to be in front of people, so I'll continue on."

Neil also confirmed that the setlist for his solo shows will continue to include CRÜE hits "Dr. Feelgood", "Without You" and "Girls, Girls, Girls". "We kind of have to," he told AberdeenNews.com. "I'd be disappointed as a fan if I went and saw me and I didn't play some of the hits…. Every song you're going to know. It's rock 'n' roll."