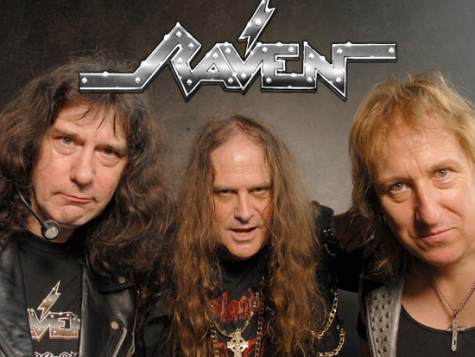 The Metal Voice recently conducted an in-depth interview with John Gallagher, vocalist and bassist of the veteran British/American heavy metal trio RAVEN. You can now watch the chat below.

RAVEN will release the "Rock Until You Drop - A Long Days Journey" two-disc DVD as a digipak in North America on July 2 via SPV/Steamhammer. The effort contains four hours and 30 minutes of concert footage from around the world, in the studio, backstage, interviews with the band, the fans, musicians and producer. It tells the story of over three decades of trailblaizing metal mayhem!

From the well-documented early days as NWOBHM (New Wave of British Heavy Metal) frontrunners, RAVEN's albums "Rock Until You Drop", "Wiped Out" and "All For One" virtually invented both the speed metal and power metal genres — during the trailblazing USA tours of the '80s introducing the States to "athletic rock" as well as giving opening acts like METALLICA and ANTHRAX their first tours, through the doldrums of the late '80s/early '90s when a grunge-obsessed media wrote off so many acts, RAVEN has consistently proved to be both survivors par excellence and in a genre of grim imitation shown that they are "the real thing". Where so many of their contemporaries have either faded creatively or become parodies of themselves, RAVEN have consistently pushed the envelope while retaining their unique sound and attack — both in the studio & in their true element, onstage!

In a music scene filled by clones nurtured with a cookie-cutter mentality, the unique personality, power and humor of the three band members has always shone through. The crazed vocals and bass playing of John Gallagher, the full frontal guitar assault of brother, Mark Gallagher, and the punishing polyrhythmic pounding of drummer Joe Hasselvander all combine to form a sonic battering ram unique in rock!

* Photos throughout the years

* 5 full edits of songs: "Crazy World", "Hellpatrol", "Lambs To The Slaughter", "Architect of Fear" and many more

RAVEN recently celebrated the 30th anniversary of its seminal album "All For One" by playing select dates dubbed "All For One Forever", during which they performed many tracks from the album, including some rarely or never performed live. Originally released in 1983, "All For One" was not only the band's breakout LP, it was also a massively influential slab of classic metal. The band's groundbreaking and high-energy approach was a vital element in the development of thrash.

RAVEN's latest album, "Walk Through Fire", was released in the U.S. on March 30, 2010 (one day earlier in Europe through SPV/Steamhammer) via Metal Blade Records. The CD was recorded at Assembly Line Studios with engineer/mixer Kevin 131 (PROJECT: FAILING FLESH, DECEASED, DYSRYTHMIA, GARDEN OF SHADOWS).