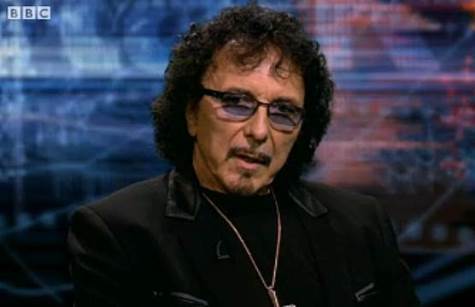 BLACK SABBATH guitarist Tony Iommi was interviewed on today's (Wednesday, June 26) edition of BBC's television progam "HARDtalk". You can now watch a clip from the show at BBC.co.uk.

In the U.K., "HARDtalk" is broadcast on the BBC News channel on Mondays, Tuesdays, Wednesdays and Fridays at 00.30 and 04.30 a.m. The program can also be seen on BBC Two at 10.35 a.m. on Tuesdays and Thursdays. You can also catch up on recent editions of the program in the U.K. on BBC iPlayer.

Outside the U.K., "HARDtalk" is broadcast Monday to Thursday on BBC World News.

Iommi said in a recent interview with the Birmingham Mail that singer Ozzy Osbourne was responsible for getting Iommi to deal with his cancer. Iommi, who has been undergoing treatment for a form of lymphoma since being diagnosed in January 2012, explained, "Ozzy was the one who kept on at me to go to the doctors because he was concerned about me. He has been very supportive since I was diagnosed. All the guys have been great. Even now, when we arrive at the studio, they ask how I'm feeling, if I'm up to it, making sure I'm okay."

The legendary guitarist told The Pulse Of Radio a while back than even when the original SABBATH members were apart or had some business issues between them, they were always okay with each other on a personal level. "We've always been talking," he said. "We've always been in touch with each other. There might be a lawsuit in the thing between us, but we still talk to each other like nothing's happened, you know."

Iommi had to rally himself to fight back against the disease, saying, "Cancer meant death to me. I started writing myself off. I would lie awake at night, thinking about selling this, getting rid of that, and preparing everything: who should speak at my funeral and where I'd want to be buried. But I also kept thinking 'I'm not ready to go yet. I've got too much to do, and I like being here.'"

Iommi says his treatments leave him "sick and tired" for about a week after each one, adding, "It takes around 10 days to recover from each round — but if that's what it takes, I have to accept it."

He admitted that working on a new SABBATH album with Ozzy and bassist Geezer Butler has distracted him from his illness, saying, "The album and tour have given me something to get my teeth into. It's not a case of taking your mind off the lymphoma — there's this little doubt: 'What if this pops back?'"