Alice in Chains Get Invited to Jimmy Kimmel's 'Sausage Party' 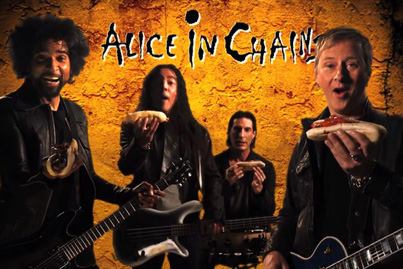 Rock titans Alice in Chains recently teamed up with comedian and late night show host Jimmy Kimmel for a musical collaboration. It wasn’t in the traditional sense of the live performances usually seen on the ‘Jimmy Kimmel Live!’ show though, as the tongue-in-cheek video below clearly demonstrates.

Alice in Chains show up in Kimmel’s new video for ‘Sausage Party,’ for the first time around the one minute and thirty second mark but don’t blink or you might miss them.

‘Sausage Party’ – a song about exactly what it sounds like – stars Kimmel and a bunch of his buddies. During the annoyingly catchy song the suggestive lyrics ring out, “Eating sausages and hanging out / That’s what a sausage party is all about.”

Themes like ‘Game of Thrones’ and fantasy football are thrown around as the video plays out to scenes of the men playing in the pool and having house parties while using sausages as props.

The unlikely appearance of Alice in Chains in the middle of the video and then again at the end force-feeding each others sausages is completely unexpected but hard not to laugh at. For a band that tackles some pretty heavy topics in their music, they are clearly proving their sense of humor and ability not to take themselves too seriously, Alice in Chains are good sports all around.