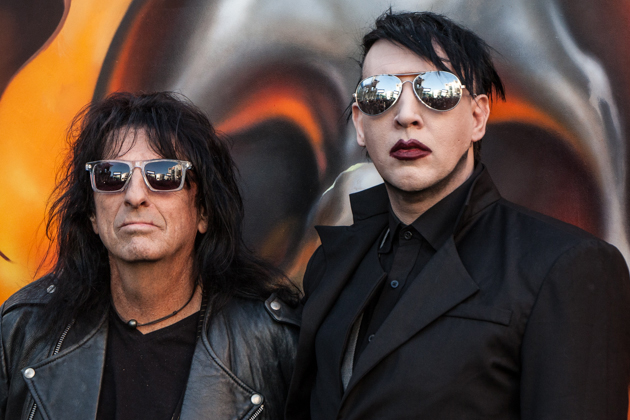 Marilyn Manson and Alice Cooper have delivered their own envelope pushing brands of entertainment since busting out of the womb so it seemed only fitting and long overdue that the dastardly duo team up for one massive shot of shock dubbed the ‘Monsters of Madness: Shock Therapy’ tour, making a stop in Uncasville, Conn., at the Mohegan Sun Arena on Friday (June 21).

Marilyn Manson made quick work of his hour long set, kicking it off in a sea of smoke with ‘Angel With the Scabbed Wings’ and launching into a collection of 13 songs that put him on the map throughout his career including the first single ‘No Reflection’ from his most recent album, 2012′s ‘Born Villain.’

When it comes to Marilyn Manson, it’s safe to say the devil is in the details. The delivery of each song was complemented by a slew of wardrobe changes, props and general irreverence for societal norms. From delivering his version of ‘Sweet Dreams’ atop industrial-sized stilts to sitting atop a chair of behemoth heights and measures for ‘mOBSCENE,’ Manson’s stage presence remains larger than life and commanding and nature.

Throughout the set, Manson showered the crowd in glitter, confetti and even shared a little cake with those in the front row. He capped off his set with ‘The Beautiful People’ leading fans in a venue-wide sing-along frenzy, closing out his set in perfect fashion.

Next up was Alice Cooper, the godfather of shock rock. What is there really left to say about Alice Cooper? With a recording career that spans almost five decades, it’s clear that Alice Cooper’s dark brand of theatrical rock has firmly planted its roots in the history of music.

Much like Marilyn Manson, who undoubtedly was influenced by Cooper throughout the years, Alice Cooper’s show delivers much more than music, it’s a full on theatrical assault of guillotines, straitjackets and macabre debauchery. Although fans generally know what they’re going to get with Alice Cooper, it doesn’t dull the experience one bit with hits like ‘No More Mr. Nice Guy’ transitioning into ‘Hey Stoopid’ into ‘Welcome to My Nightmare.’ Cooper covers a lot of ground and puts on a clinic for shock rock transforming his catalog of songs into a live horror show track by track.

In addition to the theatrics, Cooper has surrounded himself with a band of truly talented musicians. Sometimes it’s easy to forget that part of the show as a giant Frankenstein walks across the stage during ‘Feed My Frankenstein,’ but without the soundtrack provided by guitarists Orianthi, Tommy Henriksen and Ryan Roxie in addition to bassist Chuck Garric and drummer Glen Sobel, the show would fall flat.

Throughout the tour, Manson has been joining Alice Cooper to close out the evening on the classic tune ‘I’m Eighteen.’ The live collaboration brings the whole show full circle closing out the night with the faces of two different generations of artists that will go down in rock history with colorful legacies that are still being written, thanks in part to this tour.