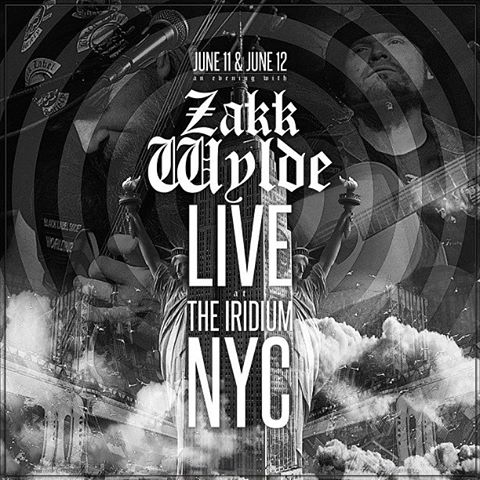 Legendary guitarist Zakk Wylde (BLACK LABEL SOCIETY, OZZY OSBOURNE) played three intimate shows earlier in the month at the Iridium Jazz Club in New York. The first gig saw him performing with the LES PAUL TRIO, but for the last two dates, it was just the Wylde and his longtime cohort Nick Cantanese.

Dubbed "An Evening With Zakk Wylde", the acoustic performance featured renditions of "Blessed Hellride", "Queen Of Sorrow" and "Machine Gun Man" as well as a piano performance of "In This River" along with "The Damage Is Done". There was also a brief fan question-and-answer session with Wylde.

Professionally filmed video footage of the June 12 performance can be seen below.

In the two decades since Ozzy Osbourne hired him away from his job at a New Jersey gas station to become his new guitarist, Zakk Wylde has established himself as a guitar icon known and revered the world over. Writing and recording with Osbourne led to multi-platinum success, inspiring him to create the now legendary BLACK LABEL SOCIETY in 1998. In the decade since, BLS has turned the notion of what a rock band should be upside down by inspiring legions of fans (known as Berzerkers) all over the world to follow the mantra: Strength, Determination, Merciless, Forever — SDMF for short. The Berzerkers, with Wylde as their leader, have created a heavy metal institution true to his vision of uncompromising, unfiltered, and unrestrained rock and roll. Wylde has won nearly every guitar award imaginable, and is a major influence on a new battalion of rock guitarists currently popular today.