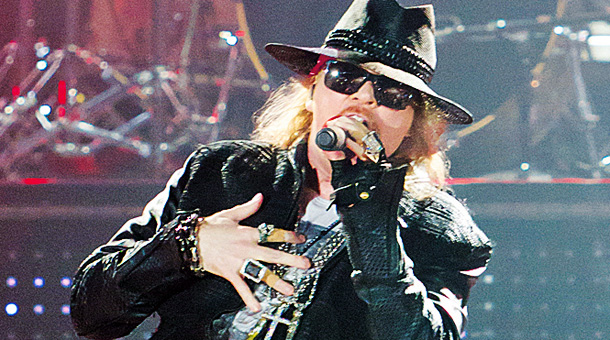 Rocker in town after heavy metal band rocked Governor's Ball, but looks far cry from his prime as a wiry sex symbol.

The Guns N’ Roses frontman was photographed browsing an outdoor flea market in Manhattan over the weekend sporting a fuller figure and hobbling with the aid of a walking stick.

The SoHo sighting was a far cry from legendary rocker’s image from G N’ R’s glory days, when Rose paraded around on stage with his shirt off to flaunt his wiry body and dated the likes of supermodel Stephanie Seymour.

Now 51, Rose proved he can still rock with the best of him. He was in town to play a series of shows — including last week’s Governor’s Ball and a surprise gig two days earlier at the Brooklyn Bowl.

Rose, of course, has earned every bit of those extra pounds courtesy of an infamous partying lifestyle that belongs in the Rock and Roll Hall of Fame.

He’s continued the band without the rest of the original lineup, including guitarist Slash, and recently told Australia’s Adelaide Now that there is no chance the classic era Guns N’ Roses lineup will ever reunite.

“Guns is my life, not someone else's,” Rose told the Australian outlet in March. “ For me there hasn't been a way to make any type of reunion work regardless of money (either talk or legitimate) without jeopardizing what I feel is the well-being and best interests of nearly everyone I'm involved with in the GNR camp (including myself).”

“ I know what I went through then. I know what I and all of us have gone through since. People enjoyed the product and the entertainment our lives gave them back in the day, but they weren't the ones actually living those lives together. It's not somewhere I'd go back to or would want to go again. Life's too short.”