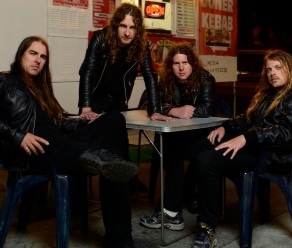 While fellow Australian rock bands such as Jet, Wolfmother and the Vines disappeared off the face of the Earth rather quickly, Airbourne are bigger than ever as they release their third album, Black Dog Barking.

The AC/DC-loving working-class rockers from Warrnambool, Victoria saw their latest effort top the global iTunes rock chart the week of its release and frontman Joel O'Keeffe was stoked to say the least. "It feels really great," he says. "After the last album we toured a lot. It was just really good to get it out there but, to be honest, we wanna hit the road and start playing some new songs."

Hit the road they have. The VB-loving quartet have been through the US and Canada in the past few months and are getting ready for a European summer of festivals. Despite their success, and that they've traded in a shoddy van for a shiny tour bus, the band is as ambitious as ever, as demonstrated on new song Hungry.

"We've still got that same passion, that same drive, that same hunger, and I thought Hungry," O'Keeffe says. "It led to being a small biography on the beginnings of the band and the hunger and drive that pushed the band relentlessly to do what we do. It is a battle cry or an anthem for bands on the road, getting out there and making a buck or having a crack at it."

Recorded at Melbourne' s Crosstown Studios, O'Keeffe and drummer brother Ryan would leave the studio and cruise the streets looking for lyric ideas. He says simply driving around with a dictaphone and an acoustic guitar inspired many stories.

"Sometimes we would stop at a pub, read the newspaper or a magazine and you might see something in there, could be some hot chick or something - that might lead to a song like, Woman Like That," O'Keeffe says. Not all their ideas were new, though. The opening track, Ready to Rock, appeared as the title track on their 2004 debut EP. O'Keeffe says the last-minute inclusion made the most sense.

"We had a whole bunch of new lyrics that we wanted to do and, to be honest, we wanted to put it on (2010 album) No Guts. No Glory but it didn't feel right," he reflects. "The new lyrics told a story and it sounded great so we just played it. It's been 10 years since our first EP, and it's a 10-track album. Lots of tens. So it was the last track recorded but the track that kicks off Black Dog Barking."