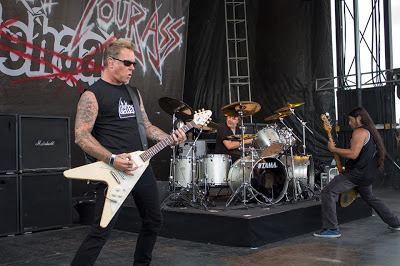 Video has surfaced of Metallica’s full surprise afternoon set at the Orion Music + More festival on Saturday, June 8, which saw the group perform their 1983 album, “Kill ‘Em All,” in its entirety.

James Hetfield appeared on stage to introduce a mystery band on the Orion bill named Dehaan; the guitarist was then joined by the other members of Metallica and the group blazed through their full debut album.

Metallica fans will recognize the band name Dehaan was inspired by the band’s association with actor Dane DeHaan, who plays a lead role in the group’s upcoming 3D concert film, “Through The Never,” due for release in September.

The 2013 edition of Orion Music + More featured more than 30 bands across five live music stages plus a variety of activities and on-site events; the Red Hot Chili Peppers headlined the first night and Metallica closed out the weekend event on the Sunday evening.

Learn more about the film and see the trailer here: