Bret Michaels A Big Fan Of His Star-Packed Solo Album 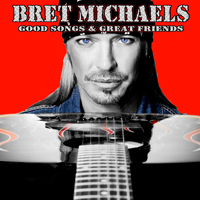 It would be nice to have a new album of Poison material one of these days, but frontman Bret Michaels doesn't seem to be in a hurry to get the band back into the studio. His latest is Good Songs and Great Friends, an album of covers of songs from his own catalog with a few covers thrown in for good measure.

"It's really not just a Bret Michaels album," the singer says. "I had so many other talented artists come in and support that it's really a Bret Michaels & Friends album. There's a staggering amount of talent on this! It's been such a fun project for me and I'm excited to share it with the fans."