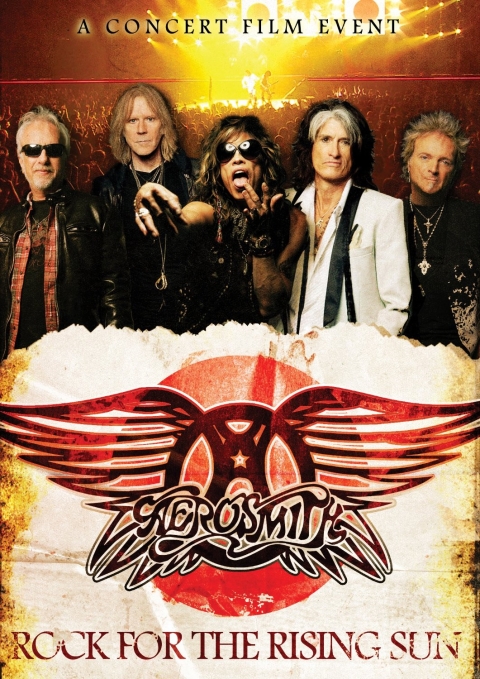 AEROSMITH's latest concert film, "Rock For The Rising Sun", will be released via Eagle Rock Entertainment on July 23. The group's connection with Japan began in 1977, when the band first played to capacity crowds in the Far East. And as evidenced by "Rock For The Rising Sun", the band-fan bond remains strong to this day. The director behind the release, Casey Patrick Tebo, is well-versed in not only his 'SMITH (he directed their music video for "Legendary Child"), but has also worked with such renowned acts as MÖTLEY CRÜE, JUDAS PRIEST, STEVIE NICKS, LADY ANTEBELLUM, THE AVETT BROTHERS, and RUN-DMC, among countless others.

Tebo first began working with AEROSMITH in 2006, when Steven Tyler and Tebo met through a colleague, and the singer invited the up-and-coming director (who was in film school at the time) to shoot a few of the band's shows — for just the band's personal viewing. Soon after, the band was so impressed with Tebo's work that they hired him to start directing their live shows.

Fast forward to 2011, and AEROSMITH was hard at work on their 15th studio album, "Music From Another Dimension!", but took a break from recording to play shows in Latin America and Japan. Sadly, the Japanese dates occurred not long after tragedy struck the region, as the country experienced a massive earthquake, a monstrous tsunami, and the subsequent meltdown of the Fukushima nuclear plant.

Despite warnings about possibly being exposed to radiation, AEROSMITH and crew, including Tebo, braved the risks and followed through with their visit to Japan. "I shot all this stuff and interviewed all these fans, and realized there is a love affair between AEROSMITH and the Japanese fans that was like nothing I'd ever seen," states Tebo. "It was almost like AEROSMITH was there helping people heal."

What Tebo was able to create is a film that not only captures AEROSMITH at their rocking best, but also, shows the group's human side away from the spotlight. "I captured all this stuff, and when I got home to the States, I was like, 'I know I can make something of this, I'm just going to start putting something together,'" states Tebo. "While Steven and Joe were in L.A., making an album with Jack Douglas, I rented out a theater, and emailed Steven and Joe, saying, 'I need you guys to come to this theater. I've got to show you something.' I played them the whole movie, and when the movie was over, Joe stood up, walked over to me, hugged me, and was like, 'That was f-ing amazing, unbelievable.' And Steven was really emotional as well."

Tebo is confident that "Rock For The Rising Sun" matches up well to AEROSMITH's earlier classic home video releases. "There was a part of me — as a fan — loving these guys and seeing them live, that said, 'Man, I would love other people to see this as well,'" he says. Soon, fans will get to experience the legendary AEROSMITH through the revealing lens of Casey Patrick Tebo.

"Steven and Joe once taught me a great lesson in life, it’s called 'Dare to Suck' — it means, if you don't have the balls to just go and do something, then you'll never know what great thing you might have missed out on. This movie was my 'Dare to Suck' moment."

Tebo is currently in pre-production on his first narrative feature film, and has since directed other large-scale television productions, most recently CMT's "Crossroads".