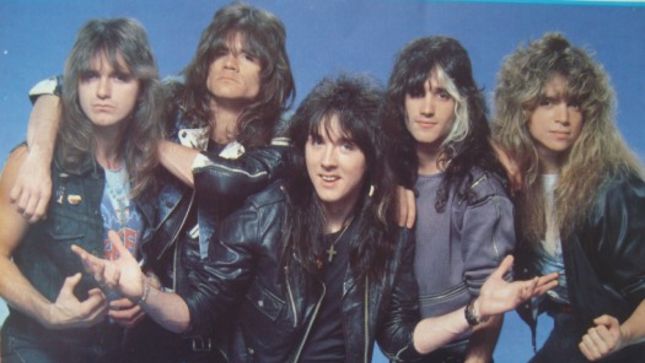 80’s Glam Metalcast has uploaded a new interview with guitarist Marc Ferrari. Ferrari talks about classic Keel and reuniting with Cold Sweat on the Monsters Of Rock Cruise. Check it out below:

On the Cold Sweat Reunion on the Monsters Of Rock Cruise:

“I am gearing up for the Monsters Of Rock Cruise. I am actually pulling triple duty for this cruise. Keel is on the boat. Every boat should have a Keel! This will be our fifth time on the cruise. But the really exciting news for the fans is the resurrection of Cold Sweat. It will be our first show since 1990! It’s been 30 years since I played with the Cold Sweat guys. I am also doing a KISS Set with Anthony and Chris from Cold Sweat and Jamie St. James from Black N Blue.

“We have had offers to go on the cruise before, but I was the stick in the mud. I was really busy with work related stuff and raising a child. With the passage of time, certain wounds have healed and I got a little reminiscent about the past. We also re-released the Cold Sweat album last year, so the combination of all these things softened me up to do this. As for more gigs - We got offered to play the M3 Fest but we couldn’t the get dollars needed to do it. With guys living all around the country, it takes X amount of dollars just to get them out the door. We’ve been submitted to do some other festival gigs so we’ll see.....I’m open to it.”

On his feelings on the Breakout album by Cold Sweat 30 years later:

“Listening back to it today, I’ll still get a kick out of hearing ‘Four On The Floor’, ‘Take This Heart Of Mine’, ‘Killing Floor’, and ‘Crying Shame’. They still are the high octane songs they’ve always been. They continue to hold their own 30 years later. Cold Sweat had the unfortunate thing of time against us. This album should have come out 1988, that’s when I left Keel. I put the band together and we had some name changes and lineup changes. In 1988, commercial hard rock and the hair metal scene was still was healthy. This album came out in 1990. By the time 1991 rolled around, the Nirvana album hit and you see a change in musical tastes. So we really caught the tail end of the commercial rock scene. Had this album come out in 1988 like it should have, our trajectory would have been much different. Also, MCA weren’t really known as a ‘rock’ label. We had an offer from Megaforce who did really well with Anthrax and King’s X. But we ended up taking a chance with MCA and got bit by it.”

“We had come off the Bon Jovi tour in 1987 playing our biggest shows ever. Three weeks later were playing dinging clubs with no support from the label. We weren’t signed through MCA directly, we were signed to Gold Mountain Records. Gold Mountain was looking to do a deal with Atlantic. Atlantic had an A&R person there that had opinions on what the next moves for Keel should be. I agreed with some of them and Ron didn’t. I am a heavy rock guy and Ron wanted to bring in a keyboard player. I was totally against that. Rather than be a thorn in Ron’s side, I decided to step aside. I was confident in my own abilities and knew I would land on my feet, which I did. Through it all, I maintained by friendship with the guys, there was no mudslinging.”

On his favorite Keel album:

I would say the Final Frontier. That album has a lot of diversity on it. We were given freer reign to self-produce that one even though Gene (Simmons) is listed as the producer. He wasn’t babysitting us as much as he did on The Right To Rock.”