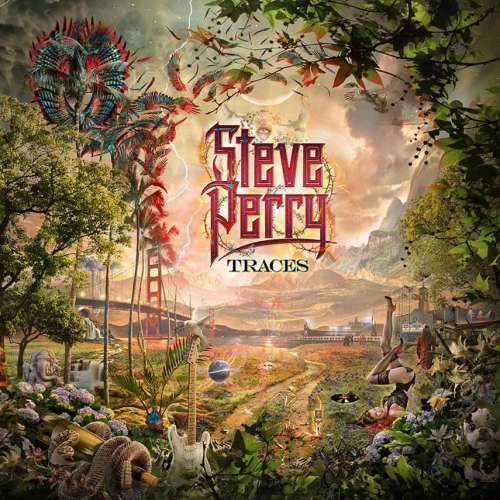 After 24 years, the legendary Steve Perry (Ex-Journey) returns to his solo career with "Traces"; undoubtedly the most anticipated album of recent years that has been in the works since May 2015. Much was speculated as to what would be a possible Perry album. Well, made up mostly of ballads, the new work is not exactly what the vast majority of fans - and I am included in that group - expected, given their musical direction. But it is absolutely undeniable that the mere fact that Perry is back on the stage is a cause for celebration, and with that in mind, "Traces" deserves a lot of attention.

The excellent rocker "No Erasin" opens the album with propriety, revealing Perry's unmistakable vocals in a fantastic contemporary AOR, with rising melody and an explosive, sticky chorus, as we all expected. On the other hand, "We're Still Here" is a ballad with a delicate melody and very well-crafted arrangement, whose tempo is almost like a mid-pacer, where the verses create an engaging aura that leads to a delicately striking chorus. "Most Of All" (written in partnership with Randy Goodrum) has accurate metrics and sweeping tempo, framed below in the foreground and elegant guitars that gently parade in a song that sounds familiar from the beginning. These early songs are enough to convince the most demanding of creatures, but there's still more. So much more…

The beautiful "No More Cryin '" (written in partnership with Semisonic's Dan Wilson) has a soul aura that perfectly fits Perry's vocals, especially in the thrilling chorus, and it's also worth noting the beautiful guitars carefully scattered throughout. Long song. And the beautiful "In The Rain" is absolutely intimate with a beautiful piano arrangement that accompanies Perry's vocals in the foreground, also featuring a punctual bass and precise orchestral inserts that add more body to the song. "Sun Shines Gray" is another sweeping rocker from the beginning, where guitars take the edge in this song that brings me to Journey’s "Trial By Fire", with a beautiful work of John 5 on guitars.

"You Belong To Me" brings bass and piano to the front line and is perhaps the most recognizable song of Perry's vocal age, but without any detriment. The arrangement is intimate and the melody engaging, not to mention the chilling chorus. "Easy To Love" has a slightly more dynamic tempo and solid bass line, punctuated by precise guitars and an occasional organ that adds brilliance to the ensemble. Still, the vocal arrangement is of a unique beauty and deserves your attention. The beautiful "I Need You" is a cover of the song originally recorded by the Beatles in 1965 and even being averse to covers, I have to give the arm a twist because Perry simply rocks with a precise interpretation and much higher than the original. Against facts there are no arguments, sorry. And closing the album we have "We Fly", whose intimate arrangement evidences Perry's vocals from the beginning. Counting on a subtle, delicate melody, this song is intense and plunges the listener into a deep, melodic chilling mood.

And this album, being the deluxe edition, has 5 additional tracks: “October In New York” is a 40s/50s jazz-influenced ballad, with a very classy arrangement with elegant orchestrations, while “Angel Eyes” reminds me of 60s Motown due to its catchy arrangement, besides having one of Perry’s finest performances. Then one of the most surprising tracks come up: “Call On Me” has a mid-tempo reggae pace, pretty much as he did on Journey’s “Baby I’m Leaving You” from “Trial By Fire”, and that might explain why this song sounds so familiar and why it grows on you instantly. And while listening to this track pay attention to the laughter from Kelly Nash (Perry’s deceased partner and directly responsible for his comeback). Another excellent track is “Could We Be Somethin’ Again”, a soft mid-pacer with a delicate and involving melody and backing vocals, while “Blue Jays Fly” presents a very relaxing, lullaby-esque, keyboard-driven melody with touching vocal mementos from Perry, closing the album in delicate note.

In summary, "Traces" is a fantastically surprising album, even having only two rockers. Of course, perhaps the commercial appeal would be greater with a more diverse set of songs, but it is astounding that so many ballads can sound so different from one another. You definitely have to be on top of your game to accomplish something like this. And from the top of his 69 years of age, Steve Perry gives an absolute lesson on interpretation and vocal versatility. Accompanied by excellent musicians, Perry performs masterfully written songs displaying body, soul and a whole lot of class (this last item also present in the flawless production of Steve Perry himself and Thom Flowers). When I learned the album would have ballads for most of the tracklist, I confess to having been fearful, imagining a tiring album. Today, I make a public mea culpa before an amazing album, cohesive as few and immersed in quality. May we not have to wait another 24 years for more stuff from Steve Perry, but right now, "Traces" is absolutely mandatory in your collection.

The fantastic “Traces” is out now.