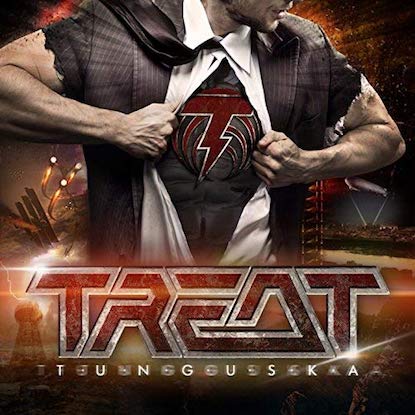 Since 2010, when the absurdly excellent "Coup De Grace" hit stores, Treat have been releasing consistent, well-crafted albums full of great songs, which cause fans anxiety at every ad for an upcoming one. Well, "Tunguska" (named after the event referring to the fall of a celestial object in the region of the same name, June 30, 1908) not only maintains the best elements present in the band’s previous albums over the last years, but also elevates the level of what was expected to be excellent. If you thought there was no more room for improvement, brace yourself for a great surprise.

Almost totally stuffed with cavalier rockers, "Tunguska" shows the musical direction that followed with the striking "Progenitors" and its powerful chorus, while "Always Have, Always Will" is more paced, but carrying a rocky and sticky chorus in the best Swedish style, which blends perfectly with the engaging "Best Of Enemies" and the dark-ish "Rose Of Jericho" and its slaughtering chorus. Four doses of the best melodic rock on the market, worthy of multiple auditions and maximum volume, as always.

"Heartmath City" retains the high level, with an engaging melody and a neat chorus, while the frenetic "Creeps" brings a fine work of guitars and bass. "Build The Love" redeems the band's more traditional sound with property (and a killer chorus), while "Man Overboard" has a more paced tempo, with bass and guitars standing out while a dreadful keyboard solo almost ruins everything. Another blistering sequence of great music that deserves maximum volume and unrestricted attention.

The alternation between more dynamic rockers and more paced one is a trademark of both "Tunguska" and "Riptide", representing the first slope with much property, whereas the power ballad "Tomorrow Never Comes" surprises with a quite traditional arrangement, but with an engulfing refrain and that emphasizes the balance between weight and melody, a recurring feature in "All Bets Are Off", an incendiary and imposing rocker that counts enveloping verses and an explosive refrain, unlike the paced "Undefeated", but that counts with a devastating and striking chorus, in the best Scandinavian style. The album closes with a predictable acoustic version of "Tomorrow Never Comes", which brings an intimate and quite different aura when compared to the original version, but nevertheless, it would be better to have a new song instead of those already stamped acoustic versions.

In short, there is no doubt that "Tunguska" is not only one of the best albums of the year, but also a highlight in Treat's career. I could extend myself in praise of the excellent production, the irreproachable performance of the band, the excellent performances of vocalist Robert Ernlund and many other points for evaluation, but I summarize all without fear saying that "Tunguska" is the best album of melodic rock of the year (I don’t see anything that could possible come close in the genre) and I won’t be surprised if it is voted the best work of 2018. An absolutely mandatory album in your collection.