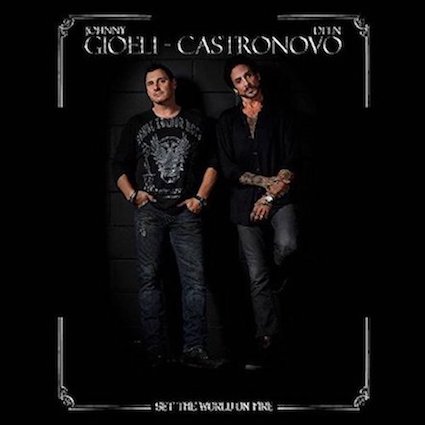 One of the most anticipated albums of the year, "Set The World On Fire" reunites Johnny Gioeli and Deen Castronovo for the first time in 26 years, since Hardline's absurdly obligatory "Double Eclipse". Since then, much has happened to both of them: Gioeli moved on with Hardline, but lent his vocals to Axel Rudi Pell and Crush 40, as well as participating in numerous projects. While Castronovo played with Ozzy Osbourne and hit a brilliant run with Journey, as well as being a founding member of Revolution Saints and currently integrating The Dead Daisies lineup. Although their schedules are quite busy, the duo met in Italy to record an album that undoubtedly should appeal to fans of traditional melodic rock, where weight and melody go together under a thin but well-defined line.

The title track opens the album bringing that traditional balance between weight and melody packaged in a frenetic arrangement that favors the vocal power of Gioeli and Castronovo, as expected. Both deliver precise and lean performances, with no room for anything else. Some would say that this sounds artificial, others would say it's talent, but be as it may, the fact is that the song is incendiary. "Through" is an evolving, friendly radio mid-pacer that grows like a wave, gaining volume and consistency as the song moves to the explosive, highly contagious chorus, where the melodic aspect overlaps with any other element. With a similar footprint, "Who I Am" is another first-rate mid-pacer, with more conventional tempo driven by bass and basic drums, while the guitars have more space and fill the spaces perfectly. "Fall Like An Angel" picks up the rocker path with property, where the keyboards have more space, being closely monitored by the guitars in one of the most radio friendly moments of the album. These four songs point to the musical direction of the album, despite the obvious differences between them and, believe me, it's impossible to be physically indifferent to either.

"It's All About You" is an excellent power ballad, with neat arrangements and space for piano, acoustic guitars and strings, plus that traditionally exciting chorus, a key detail that is present in the thrill-seeking "Need You Now" , an anabolized version of hit country track originally recorded - and composed - by Lady Antebellum in 2010 and now played by Giorgia Colleluori. But on an album by Gioeli Castronovo I’d expected at least one of the two in the vocals. The outcome is somewhat okay, but it becomes obvious that it would be a lot more interesting to have another song by Gioeli and Castronovo, who ended up opening the spot on their debut album to resuscitate a country song almost a decade ago using a third-party vocalist. And why? Who knows. But in "Ride Of Your Life" the duo retake their way and parade talent and energy in an exciting, simple, direct rocker and all played by Castronovo, but "Mother" has both vocalists in action in a more personal content range to Gioeli, who dedicated the song to his mother.

And in the last quarter of the album we have the beautiful power ballad "Walk With Me" followed by the rockers "Run For Your Life" and "Remember Me" (and their introduction with way beyond boring keyboards), while "Let Me Out" - a beautiful semi acoustic track closes the album in an amazing way and is very, very cool.

In short, there is no doubt that the work of the duo Gioeli Castronovo should please the lovers of good sounds. The recurring mementos of Hardline and Journey are in charge of entertaining the listener in a pleasant memory game. Their vocal talents are unquestionable and there is no way to pinpoint who does the best (if either can do it), and with a number of well-crafted songs the album sounds cohesive and very consistent, even with that cover still unexplained the one who writes to you. Anyway, "Set The World On Fire" is coming and, right now, is a strong candidate for "album of the year" ...

“Set The World On Fire” is out now, on Frontiers Records.

Reply Seirelm
3:12 AM on August 28, 2018
Visitors to Destiny room can find many questionnaires woman Mackenzie of any age and nationality performing nude massage in the city Bronx.

Girls Rebecca are able not only to give pleasure in this way, but also to demonstrate their other abilities to men of the stronger sex. Beauties Avery perform erotic a massage that will produce a male a vivid impression.
Prices for nuru massage depends on qualification Girls and the skills that she possesses. Before making a choice, carefully study the prices for services and customer feedback about the work of one or another masseur specialist. We are sure that the search for a real professional masseur will be crowned with success and you will be satisfied with the quality of our services. Girls Jenna are skilled workers in their field and they will help you relax after a hard day.

We have a massage parlour NY. :