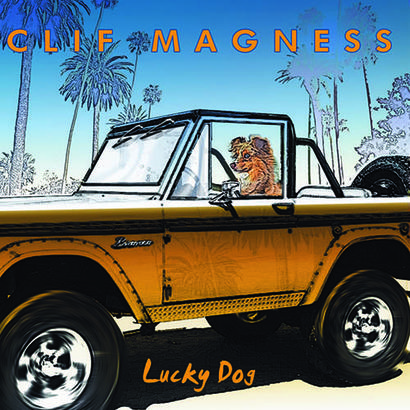 Each and every creature in the AOR universe knows the name of Clif Magness. Most likely, you have enjoyed material written by him, even without knowing it. Founding member of the fantastic Planet 3, author of a classic AOR album ("Solo", 1994) and also of countless songs recorded by all kinds of artists (including Robin Beck, Avril Lavigne, Wilson Phillips, Céline Dion, Joe Bonamassa and Amy Grant, among many others), Clif Magness has always been synonymous with quality. And it is this quality that he presents in "Lucky Dog", his second solo work and one that brings a more contemporary sound - as it is supposed to be - surrounded by an undeniable AOR aura that gives a special something to this effort, packed with songs written by Magness with longtime collaborators like Mark Mueller, Brock Walsh and Jennifer Grais.

The first single from this album is "Ain’t No Way," a rocker with a fairly contemporary sound, rising melody and a powerful chorus; but that doesn’t represent at all what the album has to offer. For a more accurate idea, listen to "Don’t Look Now," an excellent, well-paced rocker with simple arrangements and killer vocals, as well as an explosive chorus, just as Mr. Magness does. Next there’s "Unbroken", a chilling ballad that refers to the best moments of Planet 3, with its delicate melody and surrounding arrangement that converges to a powerful refrain, where harmonies bring tears to the eyes of the most merciless of creatures. In the album's EPK, Magness said that was his favorite song. It is not difficult to understand why. "Like You" is another cool rocker, and it's just not better because of the chattering arrangement of drums along the chorus, which spoils the whole course of the song. The harmonies in the refrain, however, are spectacular and feature Magness' works.

One of the very best tracks on the album, "Love Needs A Heart" is a mid-paced duet with Robin Beck (who co-wrote the song with Magness) that is a beautifully crafted, contemporary slice of AOR. Arrangement, melody, tempo, chorus, everything fits perfectly in this song that is a beautiful representation of the bridge between then and now. Meanwhile, the mid-pacer "Nobody Like You" serves an acoustic foundation in the introduction, which is readily accompanied by bass and drums in the foreground in an arrangement that keeps the tempo going but gaining body along the verses, through the more aggressive choruses. A beautiful song that shows versatility without mischaracterizing its initial proposal, while the poignant ballad "Maybe" has an absolutely AOR structure, with traditional tempo, increasing b-sections and that shocking refrain where Magness makes use of his great vocal capacity, creating memorable harmonies. With more weight, but without harming the melodic aspect, the rocker "Shout" comes back, bringing once again the AC Rock sound already shown on the album. Here, the result is nicer and I wonder if this should not have been the song promoting the album. Listen and draw your own conclusions.

In the final stretch we have "Rain", a mid-pacer bringing an acoustic arrangement up to just over 50% of the song, and this difference of formats leaves the song disconnected - in my opinion - and tiring at times, since the come-and-go of the arrangement sounds like lighting a candle for the saint and another for the devil. "All Over My Mind" is a more cohesive mid-pacer (in spite of the short tempo variations), with a chorus driven by beautiful harmonies and a neat arrangement, while the beautiful ballad "My Heart" closes the album in style, with its well-crafted arrangement and delicate melody that stands out in the moments where the weight takes over the scene.

In summary,"Lucky Dog" is a beautiful album. Although the choice for the first single seems to me a bit wrong, the album is quite cohesive, with abundant quality in all aspects and excellent songs. Even the less pleasant ones have very positive points in their sets. But what I most personally commemorated was the realization that Clif Magness is still in top form, capable of creating exciting melodies and engaging harmonies, characteristics that permeate the works in which he participated. The balance between the most characteristic elements of the AOR and the contemporary sonority created an excellent set and that deserves, in fact, to be described as having been influenced by the 80s. The return of Clif Magness to the scene takes place in style and "Lucky Dog "stands out as one of the best albums of the year.

Reply Leroyfaiva
9:39 AM on August 2, 2018
As suggested by its name, vmate App is a slidemovie downloader utilization of. whatever the case, within the considerable way of measuring most important ones making it different than some other. the job has many potential to enjoy difficulties made fascinatingly. some vmate utilisation is seen as a solitary resolution for several of your trouble. you should have a great time ranging from Bollywood, artist complete with films, movies then songs.

accompanied by vmate at mobile, You will know more about

a large number of music in addition to the instructions. even, feel hardly any charges retrievals through many types of website clip loading online websites. Authoritatively,

vmate Downloader not really obtainable online participate in secure. cause, that ten, home owners may very well android os telephones by having interpretation 2.2 and up will certainly presently now download the application. in addition, you save up to date music as well as game enthusiasts recordings using the vmate treatment. moreover, You can engage in vivid television programs on ones google android devices. this specific vmate downloader will provide you with a great deal of consists of. up and down regarding products, You will are more no stranger to the capabilities in this wonderful apps and as well thusly utilize them to save the use of your online figures amount. an amazing point to vmate as android mobile phone electronics is by purchasing this program, you may get the unlimited get.

this kind of games allows you to Watch then listen to all most recent hd videos, Songs likewise you in the same manner download and read these phones your program. the most efficient portion of the applying may receive unrestricted image and he has the 200 live comfortably television channels cost-free. vmate is without question, if truth be told, a software. present 50,000+ small valued clients submit and experienced this software program and then have outstanding assistance your vmate.

this group akin to 1000+ vivid recordings, movie, moreover songs. Cricket followers given now be qualified to watch unquestionably the cricket with a large competence from that applying. the actual other off an opportunity for you personally didn't spot the best the vast majority of fell in love with tv series in which certainly no powerful rationale so as to get curious exactly what you had the site, place that vmate system watching all the time dramas as soon as and outside of somewhere.

1. It assists in the fastener individual video tutorials.

2. Comes with an alternative to enable/disable transmit the actual other cellphone internet.

6. classic admission to save, foundation