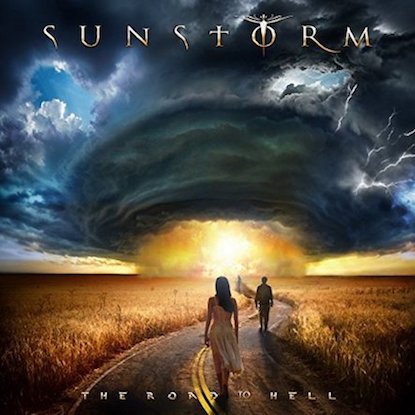 Sunstorm – The Road To Hell

With more than a decade of hard work, the Sunstorm project established its name in melodic rock, even with some irregular work and always having veteran Joe Lynn Turner as frontman. And the recently released "The Road To Hell" - the band's fifth work - hit stores with almost untouched features that have made Sunstorm a recognized name on the stage.

Overall, "The Road To Hell" doesn’tt bring anything new if compared to Sunstorm's previous works (especially "Emotional Fire" and "Edge Of Tomorrow", released in 2012 and 2016, respectively), but if we take into account that both albums are quite consistent, the insistence on the format proves to be a good strategy

Predominantly stuffed with well-built and carefully executed rockers, the album features "Only The Good Will Survive", "The Road To Hell" and "Only The Edge" as worthy representatives of the album's musical direction. Embracing melodies and exciting choruses await you.

Moving on, "Blind The Sky" and the great "My Eyes On You" and "Everywhere" (the only ballad on the album) keep the cohesion of the album bringing variations over the same theme, musically speaking, but always wasting good I like it, especially in the arrangements.

And in the final stretch the album brings the great "Calling", "State Of The Heart" and "Still Fighting" as irrefutable evidence of the cohesion present in the tracklist of the album and that sounds exactly as the Sunstorm proposes to do.

So, there's no denying that "The Road To Hell" is an album for Sunstorm fans. The statement may seem obvious, but it seems that Joe Lynn Turner and his band don’t seek to expand their fan base, but rather please the one they have already won. I continue to say that I prefer the "more of the same" instead of the "disastrous novelty," but it is also true that something needs to change in Sunstorm's work. Despite all the quality that the band has, predictability always comes when the news of an upcoming album comes to us. For now, "The Road To Hell" is worth it, especially if you enjoy the guys' work. If that's not the case, I do not think this work will change your mind, but you can take the risk.

01 Only The Good Will Survive

10 State Of The Heart