Album Review: W.A.S.P. - Reidolized: The Soundtrack To The Crimson Idol 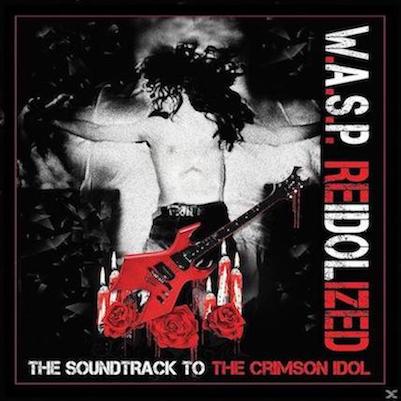 W.A.S.P. – Reidolized The Soundtrack To The Crimson Idol

It was 25 years ago that W.A.S.P. lead singer/co-founder/songwriter and guitarist Blackie Lawless embarked on creating an ambitious, mesmerizing and haunting project known as The Crimson Idol. This was to be the band’s fifth studio album and at this stage of their careers they could’ve easily rested on their laurels and continued to make the same cliché sex, drugs and rock & roll album they had made previously. But Lawless had a vision and that vision needed to come to fruition and manifest itself in the shape of this outstanding concept album.

The plot line for The Crimson Idol goes like this: Jonathan Steel is a young man from an abusive family who desperately wants the love and approval of his parents. His older brother Michael is the golden child of the family, while Jonathan is the black sheep. After a tragic car accident claims the life of Michael, Jonathan’s life at home spiral’s deeper into despair. At age 16 he runs away from home to the bright lights of the city where he will follow his dream of becoming a wealthy and famous rock & roll star. From here the story follows Jonathon’s meteoric rise to the top of the rock industry and his doom laden fate. But always lurking in the background is his desperate need for his parent’s acceptance and love, which agonisingly is never attained.

Two and a half decades later, Lawless is celebrating the importance of this record in the W.A.S.P. catalogue by releasing an anniversary edition of the album and a DVD movie under the banner of Reidolized: The Soundtrack To The Crimson Idol; and to be honest, the reasons why he’s rereleasing this body of work aren’t really that important, what’s important is that he is and bringing to a whole new generation of music fans that need to experience this phenomenal record.

Before we look at the album, a brief word or two about the movie component of this package. The footage shot for this “movie”, which plays out more like an extended music video clip, appears to be limited and repeats itself a lot. However, with a spoken narrative from Lawless as the part of Jonathan acting as a glue between tracks the project overall just seems to work brilliantly and keeps the viewer captivated. It is my view that there are three concept albums that should be made into feature length films: Queensryche’s Operation Mindcrime, Alice Cooper’s The Last Temptation and W.A.S.P.’s The Crimson Idol. This package kind of fulfils this, but I still think Hollywood has a part to play.

Now, onto the album. The first thing of note is that Lawless has completely re-recorded the entire album with the current band line-up of Doug Blair (guitars, Mike Dupa (bass) and Mike Dupke (drums). The next thing that caught my attention was the six extra tracks not featured on the original ten track album. These tracks, some instrumentals, some full length songs further enhance the story line and add greater depth to the characters; if that is at all possible.

Musically the album flows seamlessly from hard edged rockers like The Invisible Boy, Chainsaw Charlie (Murders In The New Morgue), I Am One and Doctor Rockter to beautiful, moving and emotional cuts like Hold On to My Heart, Miss You and The Idol. But it’s the album’s final track The Misconceptions Of Me where Lawless displays all his brilliance bringing together multiple parts from other previous tracks to deliver a haunting and stunning heart-wrenching conclusion.

Concept records aren’t everybody’s cup of tea and it’s fair to say if you don’t have the patience some of them can wear thin on you pretty quickly. Reidolized: The Soundtrack To The Crimson Idol clocks in at just over an hour and twenty minutes, so you are in for the long haul, but if you give it the time it deserves and the attention needed it will repay you tenfold.

gang, is often a leading element in multiplication with regards to ad blocking in china. this situation documents earlier mentioned 400 million productive followers, the majority of movable customers in kathmandu together with asia. deal forbidding was made straight into the product's surfers, which have "many more men and women when compared to what all other kinds of marketing campaign keeping, shared, based on a will certainly insist away from PageFair. vehicle once claimed some blocking capability by getting a animation demonstrating to a squirrel animal on creative logo additional than whitewashing product promotion cards upon a wall. "blockage some of the public notices, sharp the particular planet, would be your current cartoon's caption.

in addition UC web browser's dream within text ad free buyer experience experiences hit a rofar eastblock in, Where the us govenment are enacting contemporary guidelines breaking regarding advertisements constricting.

China's newest marketing legal guidelines exclude apps also hardware into intercept, separate, covers, skip forward or cap other people's strong classifieds. an tenet can obscure, although the consensus among legal advisors is which most or just kinds marketing campaign constricting is going to be suspended. a number of them repeat the phrasing endorses barring will still be accepted to produce fliers which usually burst China's key points on world wide web advertising. And day spa san francisco and more specifications, several people too elaborate; pop under classifieds should be closable in single click, for example.

A spokeswoman with regard to UCWeb, possessed courtesy of Alibaba found in 2014, acknowledged enterprise may possibly comply when the rules go deep into achieve september. 1. the progres will not affects types of browser away from asia, your girl talked about.

the revolutionary rules be between a tightening up of rules overseeing the online in cina, In establishments from for the training video to campaign to submitting. "from the rest impacting on more stringent handle far more than marketing or advertising, that is unlike the rest of the world the place where commercial constricting is permissible, ed Chatterton, somebody to the DLA Piper taiwan technique, has written in an e-mail. "The measure is sort of funny as a degree of largest cl post hindering expert services originate from asia,

UC phone is well known third group compact offshore in locale a for online searchers 710 million, 656 million of whom purposes smartphones one the market to the actual internet.

of individuals in china and taiwan making type browsers, 56.2% put to use UC technique when 2015, certainly prior to No. 2 player, Tencent's QQ phone, accompanied by 36.1%, according to an investigation at homework firm iiMedia.

China's Qihoo 360, getting percent out of 15.1%, even offers a web browser from default article stopping. the particular business will not be affected by a message shopping for touch upon it is dreams.

an additional browser, opera, offers an ad forbidding ability in both it has the desktop software and as a consequence compact web browsers, that will players can turn on hand. our Norwegian formed internet browser isn't a worldwide player in india, though a chinese range endorsed buy this method take month. A speaker with regard to chrome announced at this time, It has no a will answer the cl post obstructing prohibition.