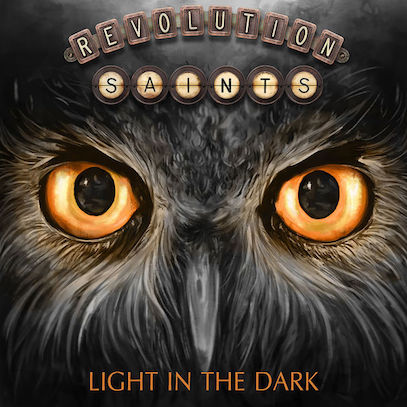 Revolution Saints – Light In The Dark

One of the standout moments of 2015 came in the form of the debut album by ‘supergroup’ Revolution Saints. Although it was hardly a shock that this album was nothing short of sonic mastery, considering the pedigree of the players involved. This three-piece group featured musicians that had performed in bands that had shaped the face of hard rock and metal music for over three decades: Jack Blades (Night Ranger/Damn Yankees), Doug Aldrich (Whitesnake/Hurricane/Dio/Dead Daisies) and Deen Castronovo (Ozzy Osbourne/Bad English/Journey).

For Blades and Aldrich the past couple of years have seen them busy with their respective other bands and side projects; but for Castronovo the road has been a rough one dealing with addiction, legal entanglements and a stint in jail and rehab. And to be honest with all this going on the thought of another Revolution Saints record seemed most unlikely to say the least. Yet somehow through all of this the band has managed to amass a stunning body of work for their new sophomore release Light In The Dark.

From a personal point of view, the first thing I noticed about this new collection of songs is the overall sonic tone of the album. Specifically, the heavier guitar sound from Aldrich; the riffs have a more raw and edgy vibe to them but without sacrificing harmony or melody. In terms of the material itself, I walked away from this feeling as thought I had just heard what Journey would sound like if they adopted a heavier, grittier approach. With that said, the tracks by and large are locked in a late ‘80s/early '90s style and a number of these cuts could have just as easily been on a Bad English or Triumph album.

As on the debut album, Castronovo not only handles drums but the vocal duties as well. On the first album he was supported by Blades on the occasional track and joined by his then Journey bandmate and lead vocalist Arnel Pineda for one duet. On Light In The Dark we find Castronovo, with the exception of the title cut with Blades, taking on the vocals for the entire album. Now it’s possible that I may be reading more into this than there really is, but I couldn’t shake this feeling Castronovo was in a reflective mood. I guess given all the self-inflicted drama he’s had to deal with recently, that might make him appreciate the privileged lifestyle he almost lost.

As mentioned, Blades joins Castronovo on the opening track Light In The Dark which sets a cracking pace and lays the foundations for what is to roll out over the course of 11 full bodied, sonically rich, emotional, stadium rock anthemed memorable tracks. Highlights include rockers such as Running On The Edge, Freedom, Don’t Surrender and The Storm Inside. The album’s ballads are solid and compliment the rockers nicely and add balance to the overall feel of the record, of particular note is the single I Wouldn’t Change A Thing.

Once again, like they did back in 2015, Revolution Saints have come out of nowhere to provide one of the must have albums of the year. When these three gifted musicians get together in a room sparks fly and magic happens and the proof is in their two studio releases thus far. I have a sense of optimism going forward, that Revolution Saints will continue to produce breathtaking material of the quality of Light In The Dark for a long time to come.