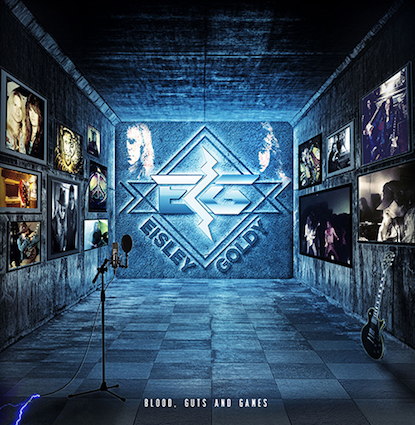 Veterans David Glen Eisley and Craig Goldy emerged into the AOR universe as members of Giuffria in the mid-1980s. With the band coming to an end a few years later, both went their separate ways. However, in October 2014, Eisley posted in a social network that he had received a visit from Goldy, who said: "Enough of this, my friend ... time to get off that ass and get back to work." Just over a year later, the duo had a series of ready-made songs that were offered to Frontiers Records. This story will have its third chapter written from the beginning of December, when "Blood, Guts And Games" will hit stores. With a pompous but very consistent sound, the duo created a work that is less obvious than it seems to be. And believe me, this is the great secret of the album.

As expected, the album is filled with striking and well-paced rockers, such as the great "Heart Is A Lonely Hunter" (with its ubiquitous keyboards in the best tradition of Giuffria), "I Do not Belong Here Anymore" (heavy and engaging) and in the excellent mid-pacer "Lies I Can Live With", smooth without sounding bland, engaging without sounding tiring. Three songs that faithfully represent the musical proposal of the duo.

"No More Prayers In The Night" has a delicate introduction, but only paves the way for a rhythmic rocker with a healthy dose of weight in counterpoint to Eisley's vocal harmonies, while "Love Of The Game" brings us - once again - to good Giuffria sounds with precisely distributed keyboards and "Wings Of A Hurricane", a song that would be much better without the exhausting almost infinite solo of guitars and Hammond, which gives a seventy air chatérrimo and that spoils much of the song.

In the final stretch, we have the ballad "Life (If Only A Memory)" with great arrangement and alternation of progress in the chorus, in addition to the great rockers "Soul Of Madness" (again, weight distributed in the right measure, keeping intact the aspect melodic) and "Track Thirteen" (heavy and cadenced, with a neat arrangement and classic tempo), as well as the ballad "Believe In One Another", which parades all the classic elements of this type of song, from arrangement to tempo, interpretation.

Summing up, expensive and expensive, the big balcony of the album of the Eisley / Goldy duo is the lack of obviousness that the names of both generate. When you imagine a work focused on "AOR influenced by the 80's" (an expression so used in past years and to which few works really do just), we have a consistent album and whose sonority refers me, in a general way, to the most recent works of House Of Lords, and in a few moments to Foreigner in the early 1990s. It is also obvious that the weight of the years has dramatically affected David Glen Eisley's vocals, but his performances are not disastrous, only contained in some cases. Craig Goldy has had more room to show what he is capable of, though there are times when the impression that his role could have been better played out. However, "Blood, Guts And Games" is a very interesting album and nothing obvious, which implies that more than one listen may be necessary for you to realize the quality contained here in its entirety. But it is a very well done work and deserves your unrestricted and absolute attention. Material well recommended ...

“Bold, Guts And Game” is out now, on Frontiers Records.