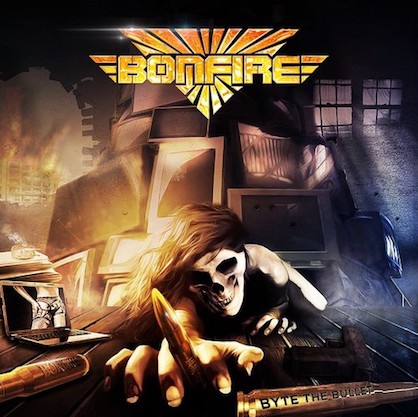 German hard rock veterans Bonfire have recorded and released their 14th studio album titled Byte The Bullet. With this announcement came the news that the band had once again made some line-up changes in the vocal department and this caused me some apprehension about what to expect from this new venture.

Over a 31 year recording period numerous guitarists, bassists and drummers have made Bonfire a pit-stop on their way to something else; and by and large I’m okay with that. But the lead singer gives the band its identity and, pardon the pun, its voice. For the better part of two and a half decades former frontman Claus Lessmann is what I identify as the “sound” of Bonfire.

With his departure several years ago I admit it has been a struggle for me to find the same level of enthusiasm for the band as I once did. For a time, former Accept vocalist David Reece filled the breach and did the best job he could, but it wasn’t quite the same band. Now in 2017 the band brings Alexx Stahl to the front of stage as he attempts to leave his footprint on the band’s legacy.

Once I’m able to leave my Lessmann bias at the door and judge the material on its merits, I’m able to acknowledge that Byte The Bullet is a pretty solid hard rock record. The band clearly has never been concerned about making lengthy records and Byte The Bullet is another in a long line of extended efforts, the album features 14 tracks and clocks in at 64 minutes.

And so we begin with the punchy opener Power Train. This seven-minute monster kicks off with a building guitar piece from band founder and guitarist Hans Ziller that explodes into what you would expect from a Bonfire tune musically. It’s pacey, meaty and full of melody and Stahl’s vocals makes them sound like a German band again… the genuine article, not just a German band fronted by someone from America. This is followed by Stand Up 4 Rock and judging from the title you can pretty much guess what you’re going to get here, again - pacey, meaty guitars with lots of fun cliché lyrics about Rock and Roll.

From this point on the album settles into a similar rhythm with cuts such as Some Kinda Evil, Reach For The Sky, Too Far From Heaven, Locomotive Breath and the title track. InstruMetal is a nice heavy guitar-driven instrumental piece which draws heavily on well-known classical arrangements. Bonfire have always excelled at the big power ballad and Without You and Lonely Nights serve the record well in this regard. The only real question mark I have with the material on Byte The Bullet is the need for another re-recording of their classic track Sweet Obsession. I have lost count of the number of times the band has re-recorded this track and I just don’t see what Ziller is trying to achieve by regurgitating it so often. The original will always be the best and in my view it’s pointless trying to reinvent the wheel.

As the final notes fade out it is clear that if Stahl can stay with the band for a lengthy amount of time the future for Bonfire might be pretty good. Sure, for me it will never be what it was with Lessmann up front, but this new incarnation has laid the foundations with Byte The Bullet to build something new and sold. This next chapter in the band's story may have some excitement to it.