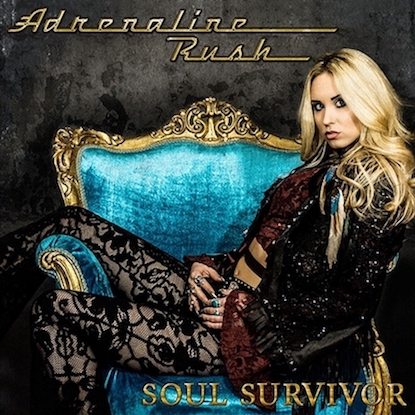 Adrenaline Rush – Soul Survivor
Written by The Rock Man
One of the surprise releases of 2014 was the debut self-titled album by Swedish hard rockers Adrenaline Rush. Lead by the talented (and visually appealing) Tave Wanning on vocals and reinforced by guitarist Alexander Hagman, this was an album that showcased everything that was excessive, flamboyant and glamourous about 80s influenced hard rock which seems to be in vogue with rock acts for the past decade or so. So when a debut album of such high standards is released I tend to have concerns if the follow up album can live up to the lofty heights set by its predecessor… on this occasion however, I had absolutely no need for concern.
A bit has happened since we last heard from Adrenaline Rush; for starters the band has had a bit of a shake-up within its ranks. The band has parted ways with guitarist Ludvig Turner and bassist Soufian Ma’Aoui and replacing them are Sam Soderlindh and Joel Fox respectively. This has had an immediate impact on the sound - more on that soon – the other point of note is the collaborative writing between frontwoman Wanning and Fredrik Folkare of Firespawn and Unleashed fame; succeeding Erik Martensson (Eclipse) who wrote on the first record.
It’s clear from the opening track Adrenaline that this is a more aggressive, meaner sounding Adrenaline Rush; replacing the polished, big sounding, 80s area rock inspired style of the first effort. As I mentioned, in part due to the inclusion of two new band members, but also due to the songwriting partnership with Folkare, which brings new scope to the table. The twin axe combination of Hagman/Soderlindh hits you like a battering ram and is unapologetic about it. The guitar solo is blistering and unrelenting and yet there is still heaps of room for melodicism. The bass/drum rhythm of the track is solid and unwavering in its purpose which brings us to Wanning’s vocals. There simply needs to be more female hard rock/metal singers like her in the business. Her style, range and tone is first class all the way, and at times it reminds me of Lorraine Lewis (Femme Fatale).
The follow up track is the lead single from the record Love Is Like Poison and reinforces everything I mentioned about the opening track and establishes a clear path and expectation for the rest of the album to come. Tracks such as Breaking The Chains, Stand My Ground, Shock Me and Sinner also serve the band well in this respect. The band hits top gear on My Life with its take-no-prisoners approach and the only time the album slows down for a breather is during the title track. But even this has a real heavy, dark and brooding feel to it, but again the band gives the song enough space for melodic crunch and Wanning’s soaring vocals give it all a nice balance.
There is little doubt that since the band’s last outing Adrenaline Rush have grown musically and as individuals. This band is no longer in the same place it was a few short years ago and the proof is in this new, grittier incarnation. If the self-titled album was more in line with glitzy ‘80s arena rock, then Soul Survivor is more representative of melodic metal.