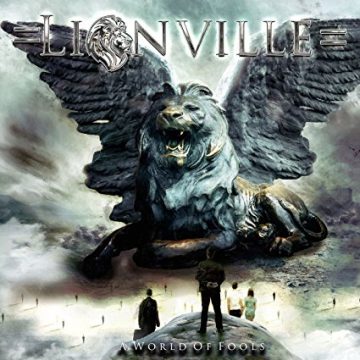 Lionville – A World Of Fools
Written by Juliano Mallon
Italy has been recovering the good reputation it has always had in the musical territory with excellent bands and projects mainly focused on AOR. Among these names is Lionville, whose two beautiful albums caught the attention of AOR enthusiasts all over. Now, after a five-year hiatus, the band returns with "A World Of Fools"; an album that features new members working with talented guitarist/songwriter Stefano Lionetti and the spectacular Lars Säfsund (vocalist who, as I have said countless times, would fit perfectly with Toto). Keeping the focus on the sound that travels between AOR and Westcoast, Lionville’s latest effort will not disappoint the band's fans and style.
The album features a series of stunning rockers, where guitars and keyboards share space in perfect balance, as I can attest in the exciting "I Will Wait" which refers to the best moments of Work Of Art, in the elegant "Show Me The Love", an excellent example of the mix between AOR and Westcoast and the excellent "Bring Me Back Our Love", which refers once again to the good sounds of Work Of Art. These three songs are easily pointed out as highlights of the album and already justify its acquisition, each of them being worthy of maximum volume and multiple auditions.
The exhilarating "A World Of Fools" (another album highlight) retains the high level of rockers as well as the engrossing "One More Night". With the great "All I Want" and the devastating "Living On The Edge", establish a powerful sequence of not only well-built rockers, but accurately played and perfectly performed by Mr. Säfsund.
And when it looks like there's no way for the album to improve, there's "Our Good Goodbye," a marvelous mid-pacer with a Westcoast-esque melodic base, which invariably refers to Toto's best moments, circa 1986. A major highlight of the album and a surprising vocal performance by Stefano Lionetti, deserving the highest volume possible and multiple auditions. And another song that deserves your attention is the beautiful "Image Of Your Soul", an engrossing ballad whose AOR / Westcoast elements are perfectly distributed, even in the variation of tempo in the second verse. And speaking of ballads, "Heaven Is Right Here" is a true representative of the romantic side of AOR, with a delicate melody and shocking refrain, boosted by Säfsund's striking vocals.
In short, "A World Of Fools" makes clear the growth of Lionville in comparison to its previous works. The absence of guest musicians - so common on their albums released back in 2011 and 2012 - didn’t affect the high quality that is expected of the band. Still, the new album ratified the talent of Stefano Lionetti as a musician and composer, and also ratified the explicit and undeniable talent of Lars Säfsund on vocals. So, there is no shortage of pointing out "A World Of Fools" is one of the best albums from early 2017 and, without doubt, a great chapter in the history of Lionville. “A Workd Of Fools” is out now, on Frontiers Records.