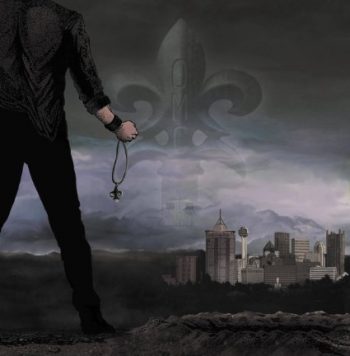 In early 2013 Metal icon Geoff Tate spoke of an ambitious project he had floating around in his head whist promoting the last ever Queensryche album to feature his voice. A month or so later work had begun on this bold new venture and details started to emerge about an idea he had to create a trilogy of albums devoid of boundaries or restrictions centred around like-minded musicians striving to achieve the same musical goal. From this came the first instalment of Tate’s new vision in 2015 titled The Key.

To refresh, The Key poses the question: Imagine you have unearthed the code to the way people view the world and time itself, change the way we travel and the human condition for better or worse, what would you do with it? Set to a backdrop of virtual currencies, internet banking and stock trading. Well, a year later Tate and his unparalleled collaboration of musicians, which includes bassists Dave Ellefson (Megadeth)/John Moyer (Disturded), guitarists Kelly Gray (Myth, Queensryche)/Scott Moughton, keyboardist Randy Gane and drummers Simon Wright (AC/DC, Dio)/Brian Tichy (Whitesnake, Foreigner) continue the story with the follow up album Resurrection.

At this point let me make note that this is a long record: Resurrection contains 14 tracks and clocks in at 64 minutes; now for those of us from the “album generation” who used to listen to records from start to finish this is no big deal. However, for those who are part of the “iTunes generation” who listen to their music in 3-5 minute spurts, this may be an issue and not for those with limited attention spans.

So, here we go. As Tate explains “It continues the story that began on “The Key” with the near death experience of the lead character known as ‘H' and his subsequent recovery of the missing encryption key. With the key finally in his possession, ‘H' has everything he needs to finally launch his long awaited project called ‘The New Reality’. Or does he?…”.

Interestingly the album kicks off with four really short tracks that are intertwining. These are instrumental/vocal/sound effect pieces that combined set the mood for the record and it has to be said, this record is moody. The first full length song comes in the form of Left For Dead and features all the hallmarks associated with Tate’s music over a 40 plus year career: First class musical arrangements, strong melodic choruses and imaginative storytelling.

Taking On The World is a killer cut. One of the many high points of the song is the strong and solid bass lines and rhythmic drum grooves. Another is the guest vocal performances from Tim “Ripper” Owens and Blaze Bayley. Combined with Tate the chorus is big and melodic and a definite home run. A Smear Campaign can best be summed up as an intoxicating blend of heavy, raw guitar hooks and moving saxophone. The keyboards featured throughout are quite haunting and the drumming is simply outstanding. Other moments worth a mention include the hypnotic The Fight and the dynamic Invincible.

It is safe to say that Resurrection is only going to appeal to a niche audience, those who started the journey with The Key or those who are hard-core fans of Tate. If The Key set the groundwork for this grandiose story, then Resurrection expands the parameters of the vision and now we wait for what hopefully will be a stunning conclusion.