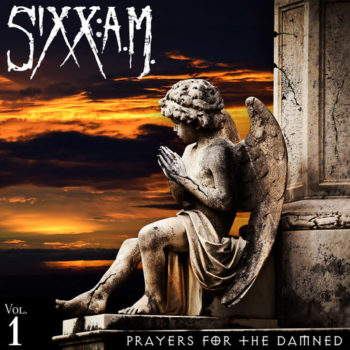 This is the first Sixx AM album I’ve listened to and after hearing this album I’m aiming to check out the rest of their catalogue. Prayers For the Damned Vol.1 is a Rock album for a modern audience in terms of both song writing and production. But what sets these songs apart from other modern Rock bands is the evident life experience which is at the forefront of many of the songs.

People who are familiar with Nikki Sixx’s ‘colourful’ history are sure to find much of the subject matter interesting. I find these songs to be stories about lives lived hard, taking things right to the edge and coming out the other side a better person.

That’s what I take from the lyrics in this album when I dig deep in to it. I’m sure other listeners will get something else out of it, as they should. That’s what makes great music. If I were to simply take it at face value, I’d be telling you that this is eleven songs with infectious choruses, passionate singing and solid band performances.

Just looking at the song titles, you’d be forgiven for thinking this was filled with cynical outlooks. I’m Sick, Can’t Stop, and Prayers For the Damned, but as you take these songs in, you’ll find this is more about accepting your past so you can move on to a stronger future. Other songs like Rise, Better Man and You Have Come To The Right Place are more straight forward.

In regards to the music on this album, there’s no virtuoso solos and flashy playing. It’s more about what suits the songs and the musicians playing together as a band, and that would be a credit to its strengths.

Years on from when a young punk by the name of Nikki Sixx formed a band of degenerates by the name of Motley Crue, he’s become a better song writer, performer and man. With a new band of musicians, including James Michael and DJ Ashba (From Guns N Roses) Sixx now has a refreshing outlook on life. The future is sure to bring more interesting music.

Prayers For The Damned Vol. 2 is due out later this year. I’m interested to hear how the band progresses on this next release, and to find out what links these two releases together.