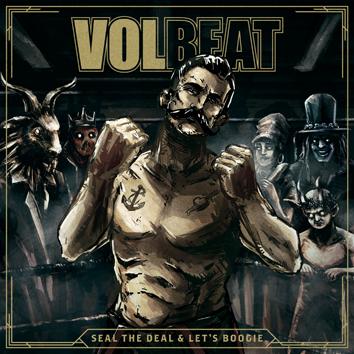 Back in 2013 I was introduced to the world of Volbeat. At that point I had no idea who this Danish/America metal outfit were but their album of the day Outlaw Gentlemen & Shady Ladies would became the surprise release for me that year. So having had the opportunity to familiarise myself with the band since you would think that when they announced a new album would be landing in 2016 that I would have a fair handle on what to expect and be excited about it, right? Well, as it turns out I’m an idiot!

For reasons I can’t explain I had no idea what the band would bring with its new body of work titled Seal The Deal & Let’s Boogie and I was kind of only half excited about the prospect of a new Volbeat venture anyway; like I said… I’m an idiot. Because Seal The Deal & Let’s Boogie not only picks up where Outlaw Gentlemen & Shady Ladies left off, but surpasses it in ways I had not considered.

If you’re looking for ways to spend 55 minutes that don’t involve getting into mischief, breaking laws or burying you face in an electronic devise then you simply can’t go past spending the time on Seal The Deal & Let’s Boogie. So boys and girls, here is the deal: We begin this blissful little adventure with the lead single from the record The Devil's Bleeding Crown. This track in many ways lays out for the listener what is to unfold over the duration of the album. Musically the track is overflowing with edgy, aggressive, melodic and modern guitar playing provided by Rob Caggiano; this coupled with the smooth, deep and rich harmonized vocal tones of Michael Poulson makes for a formidable combination. While lyrical the band reclaim the long lost art of storytelling and go far beyond the boundaries of standard “Give it to me baby, baby, baby” style lyrics so often associated with rock and metal.

Marie Laveau takes on a strong spiritual/voodoo flavour and this theme continues on the track The Loa’s Crossroad which is basically Marie Laveau’s sequel. In fact it is fair to say that these types of themes of the spirit world weave themselves in and out of the record throughout. For Evigt, which in Danish means Forever, features a wicked banjo solo in the mid-section of the song and also sees the band collaborating with Johan Olsen from Magtens Korridorer fame. While Canadian rocker Danko Jones makes an appearance on the track Black Rose which is an explosion of vigorous, rapid guitars, fist pumping rhythms and melody. Lots and lots of melody.

On Mary Jane Kelly the band takes us into the ghastly realm of the Jack The Ripper killings. As history tells it, Kelly was believed to be the final victim of the notorious killer and is the focal point of the song for the band. The track is musically so damn intoxicating you can’t help but tap along but at the same time you need to remind yourself not to get too carried away as the subject matter is pretty tragic. Another strong point of the record is the two covers which have been included in the final mix of 13 songs. The first of these is Rebound, originally recorded by American punk rockers Teenage Bottlerocket and without knowing the source material this is a pretty awesome song and for the most part sounds like a Volbeat original. The second is Battleship Chains by The Georgia Satellites and again, Volbeat do an amazing job of making this sound like one of their own.

From the get-go to the final note Seal The Deal & Let’s Boogie is jam-packed with first-class, quality material. The album is solidly produced, the songs are well crafted and played and there isn’t one poor track included here. At this point a strong case can be made that Seal The Deal & Let’s Boogie is one of the contenders for album of the year.