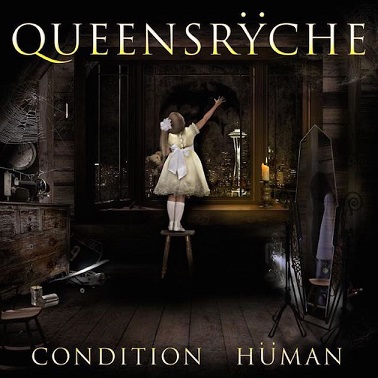 Ladies and gentlemen, boys and girls, and metalheads of all ages: Queensrÿche are back! But not just in the sense of their new album Condition Hüman; no this return goes much deeper than that. This for all intents and purposes is a resurrection of what used to be a mighty force in the world of heavy metal long ago, and a true return to form and what they once stood for: uncompromising musical excellence. The turmoil that has engulfed this band over the past several years has been well documented but now that the messy break up and legal entanglements with original singer Geoff Tate are done and dusted you get the sense that the band is refreshed, enthusiastic about the future and alive again.

A great weight has been lifted from their collective shoulders and it shows in the quality of work on Condition Hüman. Right from the word go you can tell this is going to be a different Queensrÿche experience from some of the media/fan criticised efforts served up of late. From the opening few bars of the first single Arrow Of Time, there is a strong feeling that the band have rediscovered the “Queensrÿche” formula and returned to a style more in tune with albums such as Empire and Hear In The Now Frontier. Put simply, from start to finish this sounds like a Queensrÿche album should.

I don’t know how much time needs to pass before a song can be legitimately classified as a “classic” but I am more than happy to label Guardian in that category. This is the type of song which the band built their reputation on, and I can see this becoming a crowd favourite in a live setting. Other cuts that are sure to warm the hearts of die-hard fans include Hellfire, Selfish Lives, Hourglass and the brilliant seven and a half minute finale of the title track.

A hallmark of the band’s music is the ability to intertwine acoustic guitars with heavy riffs and change the dynamic of the song in the space of a five minute time frame. On Condition Hüman they visit this approach with outstanding results on the haunting Bulletproof and Just Us. The band are no strangers to exploring social and political commentary, relationships, revolution, lucid dreaming and the human condition. Once again Queensrÿche venture down these reliable and familiar roads of inspiration.

This is vocalist Todd La Torre’s second outing with the band and it is clear he has settled in well with the group and is more than capable of filling the void left by Tate’s departure. His vocal approach feels natural and a perfect fit. Guitarist Michael Wilton appears to have rediscovered his spark, his performance on this record is nothing short of breathtaking as he cranks out many melodic, but heavy, riffs and amazing solos. Wilton is adequately supported by guitarist Parker Lundgren, while the driving force of the band without doubt is the combination of bassist Eddie Jackson and drummer Scott Rockenfield who tackle this record like a battering ram.

While I have enjoyed their previous releases, Queensrÿche, Dedicated To Chaos and American Soldier, it has been a long time since the excitement of a Queensrÿche record has stirred something within. I am so pleased the band have found their way again and regained their place as a heavy metal giant. There is no doubt in my mind that Condition Hüman will become a special moment in the band’s legacy.

Reply infrmr
8:23 PM on September 4, 2015
The same morons on Youtube are still running around in circles with their fake accounts. Buck Norris is either Jeffrey Loux or this guy, Jorge Velasco. he has an account on Twitter adictoalfut

Jeffrey Loux was the original idiot with multiple Youtube username EGX500, Elduce580, Ringle41, and a few others dating back to 2008. He is a Geoff Tate loyalist and can be found on Facebook.

Jorge Velasco is a copycat poster that popped up around 2014. I think his original handle was Juan Hazboun. Then he created a bunch of ripoff accounts Todd and Sucks QR Rip, AlemaniaChampion and a bunch of others.

Reply Klaus
11:01 AM on August 7, 2015
I´m not quiet sure if the "die hard Queensryche fans" would appreciate a return to the sound of albums like "Hear in the Now Frontier" or "Dedicated to Chaos" which is the worst Queensryche record ever -imho.
But arrow of time seems to guide the way back to their first 4 albums and that is what the reviewer seems to hint at.....