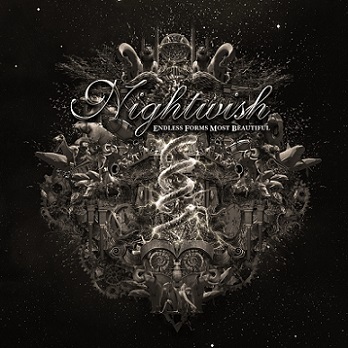 After the brilliant Imaginaerum album I’ve been eagerly awaiting to hear what Nightwish will do with album number eight. With the sudden departure of Annette Oslon during the previous tour, the band have survived their second vocalist change within the past decade and have become all the stronger for it with the addition of Floor Jensen on vocals. Furthermore, they’ve recently had to deal with the news that drummer and founding member Jukka Nevalainen would need to step away from not only performing on the album but also on the upcoming tour due to his struggles with insomnia. Kai Hahto, from Wintersun and Swallow the Sun, is handling the duties on the skins.

This is Floor Jansen’s first appearance on a studio Nightwish album. With it she brings the best of both eras of Nightwish into a powerful soundscape with her diverse use of her vocals. Her voice can at times be scarily intimate and at others beautifully demonic. She has the best of what Tarja and Annette brought to the band but brings her own unique identity to the foreground.

The title of the album, Endless Forms Most Beautiful may at first appear cryptic but makes more sense when you know it’s a quote from Charles Darwin’s 1859 book On the Origin of Species. His theories of adaption, evolution and the development of humanity are running themes throughout the album. Ethologist and Evolutionary biologist Professor Richard Dawson is a guest speaker on the album.

On previous albums Dark Passion Play and Imaginarium the band moved into grand compositions, complex orchestration and thematic song writing, which are maintained on this album, but songs like Edema Ruh and Aplenglow draw a welcomed similarly in feel to the band’s second album Oceanborn. There’s a cool guitar solo on Aplenglow; there’s not many on the album but when Emppu has his time at the foreground it’s to heighten the song and in this case there’s a trade off with the pipes before they play together.

With the opening track, Shudder Before The Beautiful, the band - now a six piece, with Troy Donockley on uillean pipes - gets down to the business of taking their sound to the next level with intricate compositions and explosive percussion. The crowning moment of this song is a trade-off solo between the keyboard and guitar, which further goes to show Nightwish are indeed operating on all cylinders.

My Walden, with its melodic pipe heavy feel, has a very outdoorsy, Finish vibe always venturing forwards. Floor’s and Marco’s voices work great together. The leadoff single, Elan, is about our own meanings of life and how sometimes we just have to go with it and travel the path less travelled. The track Yours Is An Empty Hope gives bassist Marco Hietala a chance to shine vocally and the title track, Endless Forms Most Beautiful, is upbeat, energetic and infectious.

The final epic track on the album, the twenty five minute The Greatest Show On Earth, is structured into various parts, divided by soundscapes that suggest the development and progress through our planets various and unique ages. It also suggests the progression of music throughout the ages. There are primitive instruments combined with keyboards, and if you listen closely around 14.30 mark you’ll hear the riff to Enter Sandman.

In addition to being a composer and poet, Tuomas Holopainen appears to be a constant observer of the human condition. Lyrically, he’s not preaching beliefs or offering opinions, but rather suggesting ideas for the listener to avoid complacently and to inspire thought. Sometimes, his best ways of conveying through is through music alone, as is the case with the instrumental track The Eyes Of Sharbat Gula, it also features some amazing work on the pipes from Troy Donockley. His addition to the Nightwish sound perfectly helps to bring a whole new dynamic and opens up new possibilities for not just the band but for metal in general.

With all the depth and complexity within this album I could go on and on, but if you like bands who write music that will last, that you can keep coming back to and discover new things over time as you grow and evolve, then you’ll adore this album.