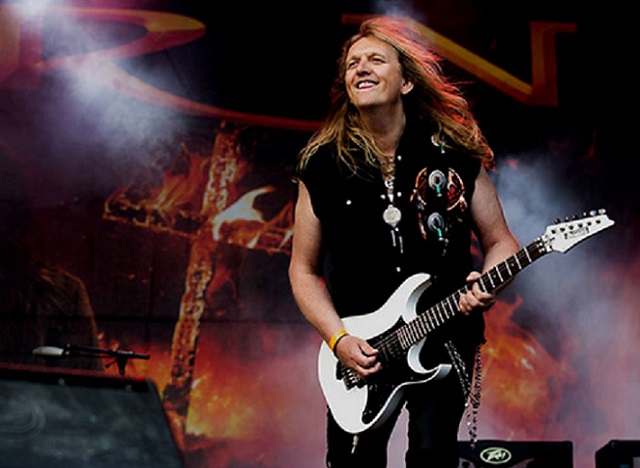 It has been a long held belief of mine that vocal performances can be divided into two categories: A. Singers, and B. Storytellers. Basically this is my thinking: singers, while there are many talented and entertaining ones, for the most part tend to just rattle off the lyrics and move on to the next song. Storytellers however, have a unique ability to transport you to different worlds, different eras; to feel the emotion of the words and bring to life someone’s amazing tale. A prime example of this is the latest collaboration from Norwegian rock god Jorn and ex- Wig Wam guitarist Trond Holter, titled Dracula – Swing Of Death. This is an exhilarating musical masterpiece with Jorn providing an amazing storytelling performance, but what separates this concept album from others is the contribution from Holter. On a purely musical level, Holter tells his own Dracula tale and it is one worth exploring. I took the opportunity to catch up with the guitar mastermind behind this project to discuss the album, this former band Wig Wam and the value of full length albums.

Rock Man: Firstly, congratulations on the release of the album Jorn Lande and Tront Holter presents Dracula – Swing Of Death. This is simply a superb effort, I would imagine both of you are extremely proud at how well this album came out?

Trond Holter: Yes we are. We have worked on this album for quite some time. I started this idea back in 2008 and wrote lots of songs until I got a hold of Jorn’s number and we started working on it a couple of years ago. So, yeah we are very pleased.

RM: Over the generations there have been many variations and re-telling of this fascinating story. What is it about your version that is different or unique from other versions?

TH: Well, we only took the love story part of the story. Instead of making a rock opera we like to call it more like a concept album. Because a rock opera would be a lot like a theatre thing, a concept album is more like, Alice Cooper than Dream Theatre, you know? That is why we only kept with a simple story and that is how it came out, mainly the love story behind it.

RM: So where did the idea to write an album about this character come from?

TH: I was on a trip back to Romania back in 2008 and I had a day off and I was sitting in the town square, in a town in the middle of Transylvania. And there were a lot of things, you know, like you can buy books and cups and t-shirts with Dracula and suddenly it hit me ‘I have to write about this’. So that is when I started writing about it, back in 2008.

RM: More often than not when an artist releases new material you will hear them say things like “This is the album we have always wanted to make”. Is that the case here for the both Jorn and yourself with this record?

TH: Yes, personally it is the case for me. I do not know about Jorn, he has made so many massive albums, but yeah it is the case for me. I have been in so many bands like Dream Police, we released albums back in the early ‘90s and you can hear some of that stuff in there and of course you can hear stuff that I did with Wig Wam. Of course there are a lot of things I have put in this record and yeah I could say with my hand on heart this is the best thing I have ever done.

RM: How would you describe Jorn’s performance on this record?

TH: It is magical. He is a hard working singer, releasing 15 albums or something without being a star yet, you know, but he is the biggest underground star there is. With his voice I think he is one of the best voices there is and I am very proud to have him on this record.

RM: Do you think that he is an underrated singer amongst the hard rock/metal community?

TH: No he is not underrated; I think everybody knows he is one of the best. But maybe you have to have that commercial success that Ronnie James Dio had at this time, you know, times are changing. So it is not the same now as it was for the guys in the ‘80s.

RM: The album features guest vocals from Lena Floitmoen and she delivers a stunning performance throughout. Can you tell me about working with her and your impressions of what she brought to the record?

TH: Yeah, she was a backup singer on a Wig Wam tour in 2010. I asked her to try a couple of tracks because I liked her singing and she did a great job. It is very technical, like the song Save Me, for instance, very technical and very hard to sing for a female singer. So I was very impressed by her ease when she did vocals because I had some girls before that tried her parts and they were really struggling. She is a very talented singer.

RM: In terms of your guitar parts on this album, did they come fairly easy to you or were they challenging in any way?

TH: Yeah they were challenging because it is not like we just wrote a rock thing that is three minutes long or something with a guitar solo and this AC/DC riff, they are more complex songs. For instance, three of the solos are more like classical music almost so you have to build and that is why I had so much fun doing it, building up this classical stuff around the guitar solos instead of just cranking in and out. So it took some time but the results are so much better.

RM: The first video from the album is Walking On Water. This is an exceptional song and a cool video, I particularly like the idea of Jorn standing on the water. Can you tell me about where this video was shot and was it an enjoyable experience?

TH: Okay, it was certainly not warm [laughs]. It was not a warm experience and I believe it was like, it was very cold and we took some stuff where Jorn would stand so it actually looked like Jorn was standing on the water, so we had to builds something under there. And with the water, the tide, you know, it comes and we had to be at the exact right moment so we had to wait for a while and we did the shots and nearly froze to death [laughs]. But when it is cold the air gets very clear too and there were some great shots and his house is very near, not exactly right outside but a couple of hundred metres down the lake. And the other parts are from my home town and there is a big fortress and that is where we shot the rest of the video, where I am standing is part of this big fortress. And it was absolutely freezing when we shot there, it was not snowing but it was very cold [laughs].

RM: Are there any plans to play this album live in its entirety or do a world tour around it?

TH: Yes we are working on the live show at this moment. And I think we will be ready in like September or something. Because this is a lot of work and it takes a lot of money to get all the effects and everything that we need to do this as a special show when we play the whole album. So we have some time left to work on it, it will take some time but there will be a band on stage we will also have videos that are running in the back and special effects that will look great.

RM: Shifting gears slightly, you have made your name as the guitarist for Wig Wam. Looking back at your time in the band how would you describe your experience?

TH: Well, we had a great time doing that. Wig Wam was born in a time, in the early 2000s, when nobody cared about, nobody played AC/DC on the radio, nobody played Van Halen on the radio and nobody cared about the music at all. So we started for fun in 2000, I think, and we dressed up like crazy to get attention and we did [laughs]. But the music was always, I would say we were always serious about the music, there was joking about everything else but the music was always very serious. So at first we were more like Steel Panther in Norway like they are now but as it went by people wanted to take us more seriously and I guess we did too after a while. It kind of changed but we had great success and we had great support in Japan and Europe and of course Scandinavia, so we had a great time.

RM: Looking through the band’s catalogue of albums, can you identify one that most represents what Wig Wam was about?

TH: I guess the first two albums are probably what I enjoyed the most about the band. The two last albums are more like hard work and a band that did not have that much fun anymore, you could hear it on the songs. But the two first albums, I still enjoy listening to them; you can hear that is a band having fun.

RM: You hear more and more artists coming out saying that it is getting to the point where it is not worth making full length albums anymore, given the decline in record sales, the popularity of iTunes and downloading. What are your thoughts? Are full length albums still valid in this day and age?

RM: It seems that in recent years there has been a lot of social media infighting between artists and also fans against artists. Do you think the hard rock/metal community is as strong and united as it once was?

TH: Yeah I think so. There are more strange people on the internet now, you know, critiquing artists and everything, but I think it is a community that sticks together and supports each other. I think so.

RM: Once again, congratulations on the album Swing Of Death. On behalf of everyone here at Full Throttle Rock I would like to wish you all the best for the album and all the best to you and Jorn for many years of success.

TH: Thank you very much. We hope to get to Australia some time.

For more information about Trond Holter visit him on Facebook at www.facebook.com/TrondHolterOfficial 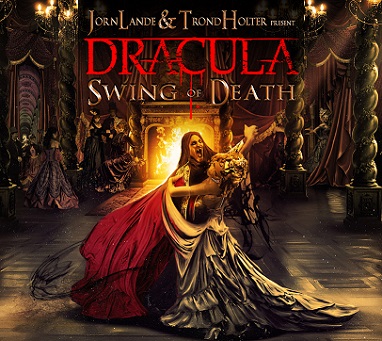