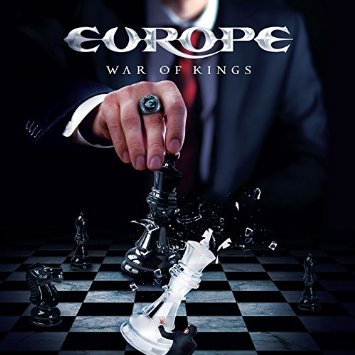 Forget what you think you know about Europe. Yes, they made their name off the success of The Final Countdown era; and while that was the sound of the band at that time, it actually is not a true reflection of the band, for there is far more to these Swedish superstars than that one period of their career. For the better part of the 1990s the band went their separate ways but released new material in 2004 with a harder, more edgy brand of rock and roll. Since then the band have stayed true to this course releasing several more high quality records, and in 2015 the band returns with War Of Kings.

The standard version of the album features 11 tracks, while a deluxe edition contains a bonus track. For me, this record harkens back to the early days of the band during the Europe/Wings Of Tomorrow era of 1983/84, and yet at the same time they manage to maintain a modern twist that reflects the past decade for the band. Any number of songs here could have featured on various past albums.

Take for example the title track which kicks off the album; here is the perfect blend of paying tribute to the past while embracing the here and now. The verses are very modern but it is the chorus where this song really comes into its own with a strong 1984 flavour. Hole In My Pocket is the next track to explode out of the speakers with guitarist John Norum putting in a cracking performance and drummer Ian Haugland killing it behind the drums, the song is pacey and full of groove. Second Day is an edgy mid-tempo rocker with another big traditional Europe style chorus.

The band has made no secret about being influenced by the likes of Led Zeppelin, Deep Purple and Black Sabbath, and on numerous tracks that influence shines through. Praise You, Nothin’ To Ya and Days Of Rock N’ Roll all have shades of hero influence running through them. Children Of The Mind is a funky, psychedelic, grungy style cut while Rainbow Bridge draws on Middle Eastern flavours. The only ballad on the record is Angels (With Broken Wings) and while this song did not set my world on fire, my hat does go off to singer Joey Tempest who puts in a stunning vocal performance. The album concludes with the groove fest rocker Light Me Up on the standard CD and the bluesy instrumental Vasastan on the deluxe edition.

If all you know about this band is that late 1980s Final Countdown/Out Of This World period of the band’s history, then I strongly suggest to give this album a miss. There is no reliving those glory days to be found here. This is for those that were there from the beginning, who remember Europe before they went commercial or those who picked up the band post 1990s.

Reply Carieann
7:01 AM on June 13, 2015
And i'm not going to read nor reply to any stupidities of blind and naive ?stans?. If any of thousands deceived, blind ignorants want to write back saying that doesn?t believe me, read carefully the lyrics of Europe?s ?Danger on the track? and if your eyes and minds still will be closed so just wait, time will tell that all written here it?s the truth and all this huge farce definitely will come to an end one day!! Lies can?t last forever and they will be forced to end all this whole meannes and all liars, posers will disappear. Some of you might want to fix your huge errors then, but it can be too late to do that. And the real, THE ONE AND ONLY Joey Tempest will come back. Not to this group because they never deserved to have him as a friend. He will be happy and will be appreciated the way he really deserves by wise and really good, righteous people. And it?s just a matter of time before the truth will come out, THE FINAL COUNTDOWN ? as an angel Joey sings!! This is why that song has become so succesful and Joey made it huge because it?s the song about the truth. So the truth will come back to earth!!! This is The Countdown the one and only, real Joey Tempest was really singing about ? TO LOVE AND THE TRUTH!!!

Reply Carieann
6:58 AM on June 13, 2015
This is for all those who say that the band Europe is still great or that still make great albums ? STOP writing such a shocking nonsenses and stupidities!! All last albums are false and absolutely horrible and this fake band has nothing in common with the real group Europe from the 80?s, now they make fake records, fake and lifeless music without a soul, fake ?shows?, all is fake and false and that?s because since the middle of 1989 the real Joey Tempest is not in this band and Joey was truly the only one who has made this group huge with his talents, awesomeness and uniqueness!! And since 26 years there?s such a horrible imposter and liar in this ?group?, that?s not the real Joey Tempest!! The real Joey Tempest had to leave the group because of this horrible liar!! It?s so obvious and so clear to see that it?s just someone different (unless you?re blind and deaf, like bunch of ignorants). Only blind and narrow-minded can?t see that there?s a completely different person, not the real Joey in the video with interview from UK concert in august 1989 (and i?m not saying that because of different hairdo but because of everything else) and later is also in all the rest of the videos and everywhere. It?s very recognizable that it?s someone different and if you would know and appreciate the real Joey Tempest very well like he absolutely deserves to be known and appreciated, you would just know and see that instantly. But it is not recognizable to you because you all never knew nor appreciate the real Joey Tempest at all if you believe in such a huge lie, if you believe this awful and horrible liar, an imposter!!! So you never, ever were Europe nor real Joey Tempest?s true fans and you absolutely aren?t at all!! How could you do this to real Joey??!!! How shockingly stupid and close-minded you all are!!! Such a shame, shame on you all!!! The same applies to the rest of the ?members? of this ?group?!!! No one is talking about it all, because unfortunately the whole world (except a few intelligent people) idiotically has fallen for all these lies, shockingly stupid and idiotic ?fans? are still buying and enjoying all this falsity, exciting about all this cruelty, taking a part in this huge meanness, only helping these liars to make such a huge farce but time will absolutely prove you?re all so wrong!! You idiots, incapable of logical thinking accept, praise and support mean, negative imposter and liar, can?t see the truth and it only shows that you didn?t appreciate at all the one and only, real Joey Tempest and that?s a huge, huge mistake and therefore you absolutely don?t deserve and you have no rights to call yourselves a ?fan? because you never were any kind of fans!! This horrid demon also released solo albums under the name of Joey, still insolently pretending to be Joey Tempest!!! And this disgusting, hideous and rude imposter has nothing in common with the real Joey Tempest, Europe?s vocalist in 1982-1989, not only his looks and sound of voice are completely different but also behaviour, eyes, facial features, personality and absolutely everything!! And the excuse that it could be because the years have passed, it?s just such a stupid and lame excuse!!! This is just a totally different person!! It?s not even a person, he acts like some kind of a devil!! He isn?t even real Joey? Tempest?s look-alike and never, ever will be like Joey!!! A real Joey Tempest had so much love for the fans, he loved people generally and it was so clear to see, he was such an amazing, unique, loving and beautiful person inside and out, the most amazing person in the whole world, he was very talented, gifted, with pure, heavenly voice and had a lovely, beautiful, angelic soul, he wanted to give fans all what was the best to give and he gave all of that, not like imposter which is incomparably worse and gives all what?s the worst with his rude behaviour, obscene facial expressions, offensive gestures towards people and has no talent, no soul and no voice!! There?s not even comparison between him and the real Joey Tempest!! This demonic devil only cares about himself, this whole falsity and not about the ?fans?, his main and the only goal is to make fools of as many people as possible to still gain more and more as long as it?s possible undeservedly and you all brainless idiots still help him to do this!!! And the real Joey Tempest gave people all the best he had and what you stupid ignorants and idiots gave him in return, what you all did to him instead??!!! You never knew nor appreciated him at all and you love, accept and support false and bad imposter, it?s so unfair, mean and cruel!!! You are worshipping the devil!!! I repeat ? Shame on you all!!!