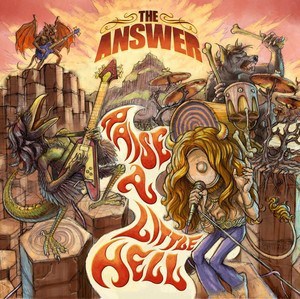 The Answer – Raise A Little Hell

For those unfamiliar with The Answer, the band formed in Northern Ireland in 2000. Their debut album sold tens of thousands of copies in the UK, Europe and Japan, and they spent a year opening for AC/DC on the Black Ice tour. Now with their fifth album, Raise a Little Hell, the band have taken it up another notch with twelve killer tracks that you just know will go over great on a live setting.

What comes across most about Raise A Little Hell is how natural the songs feel. Nothing is forced. The structures flow with ease, lyrics fit the feel of the music and the songs are heart felt and honest. By writing songs based on his own life and experiences, front-man Cormic Neeson has created songs that everyone can relate to. The band, consisting of Paul Mahon on guitar, Michael Waters on bass and James Heatley on drums, create tight performances and energetic music.

With a hooky kick drum and bass accompaniment that builds anticipation, Long Live The Renegades opens the album in fine style. A laid back track that seems to celebrate all that this album is destined to become. This is a band confident with where they’re at and happy to be unleashing the hard work they’ve put into these songs. The guitar solo is brilliantly crafted and carries the listener from one part to the next.

The Other Side is a great example of just how good these guys are as song writers. There’s a masterful way the band takes the listener from verse to chorus, etc. Some killer riffs and slick changes. The next track, Aristocrat, is a killer rock track which has some killer harmonica on there. Cigarettes & Regret shows how good a band can be when the instruments complement each other, making it shine.

The band masterfully take the listener through various peaks of energetic burst before bringing things down again while maintaining anticipation on Last Days Of Summer. I Am What I Am is perfectly suited for the live experience. The audience can really get in on the lyrics. Whiplash is one of the stand out tracks on this album, the structure and the flow from one part to the next is fantastic. This will get your head nodding. This one is a future classic.

Strange Kinda’ Nothing and Gone Too Long are two tracks with some very heartfelt lyrics. The former taking the moderate acoustic style that never feels the need to fall on the melancholy, while the latter is a melodic mid tempo rocker that would suit rock radio perfectly. How could it not with a lyric like ‘I apologise for all the shit I’ve done.’

This has everything a rock n roll album needs, light and shade, exhilaration and regret. There’s no need for the break neck tempos, or heavily distorted tones. Songs can be hard and heavy through subject matter and a band that know how to perform and write together. Without doubt a defining moment in the career of The Answer. The question now is… what comes next?