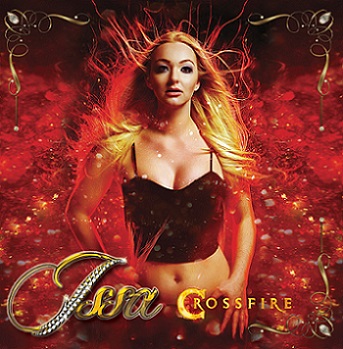 One of the standout albums of 2010 came from little known Scandinavian singer Issa. Her debut album Sign Of Angels introduced us to her electrifying brand of commercial melodic rock. Since then she has gone on to record two other studio works; The Storm (2011) and Can’t Stop (2012). But her latest album for Frontiers Records titled Crossfire, which features tracks five years in the making, could arguably be her best yet.

The album gets off to a cracking start with a title track which clearly spells out what is in store for the next 47 minutes. The song is bursting at the seams with her velvety vocal style, loads of catchy hooks, a ripping guitar solo and shades of Romeo’s Daughter. Further down the track list songs such as New Horizon, Long Time Coming and Heartbeat can also be put into this same basket.

The album features two ballads. The first is Raintown featuring FM frontman and guitarist Steve Overland on guest vocals. The pairing of these two is a master stroke and whomever is responsible for suggesting the idea is a genius. If you are familiar with previous work from Steve Overland and Issa, then you can imagine what a powerhouse vocal performance these two bring to the track. The second ballad is Fight Fire With Rain; a mid-tempo in pace, demonstrating how well emotional sensibility can blend together with rocking attitude.

Ghost Inside My Heart oozes melodic goodness and did not take long to become a personal favourite. Red Lights follows the same formula and while the easy comparison is to relate both tracks to '80s Heart, it is pretty obvious and cannot be ignored. If you close your eyes you can almost imagine Ann and Nancy Wilson tackling these tunes.

Lyrically Issa won’t win any award for reinventing the wheel. Her lyrics are stock standard tales of love won and lost and relatable relationship issues. For example, “Maybe I should have seen the signs/Wasted days and sleepless nights/Another time and maybe we could work this out” on Heartbeat and “Now I can’t breathe without you next to me/Boy you’re always on my mind/And now I found you I’m never letting go/I have your name across my soul” from Only You. While this is simple basic song writing, this is the album’s strength and what makes it so enjoyable. Another aspect of the record I really enjoyed was the production values. Mainly the right balance of guitar versus keyboards. So often on these types of records the use of keyboards can be overkill and dilute the sound of the guitars, but here producers John Greatwood and James Martin have struck the right balance.

While it is so early in the new year to start shouting from the roof tops “Album Of The Year!” there is no doubt that come years' end Crossfire will be in the mix for the title. The only question, for me at least, is what future releases will stand in its way. Someone will have to put out an amazing record because this album is simply a cracking effort.