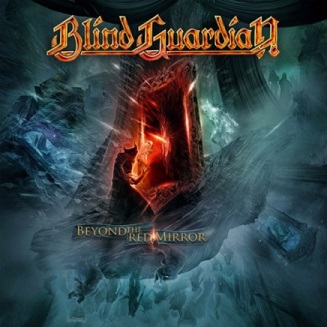 BLIND GUARDIAN - Beyond The Red Mirror

Hit play on this CD and The Ninth Wave gets right to work in painting a picture of a world in turmoil through the use of choirs and dramatic symphonies before the heavy guitars kick in and the familiar voice of Blind Guardian’s singer Hansi Kürsch emerges to drag us through this story of toil, peril, tyrants and Gods. Yes indeed, Blind Guardian are back more powerful than ever with this career defining release, which includes three choirs and two symphonies (each with 90 musicians). This also takes the crown for the band’s tenth studio album release. Story wise this is a sequel to the band’s landmark 1995 album Imaginations From The Other Side, developed by vocalist Hansi Kürsch during the lyric writing process.

With the appearance of an orchestra in their previous album, At The Edge of Time, some fans have been concerned that Blind Guardian are moving too far away from their known style and sound. For me, this album proves that the orchestra simply heightens their power and adds extra layers and textures to their compositions. My only question is why didn’t they do this sooner?

For the first time in their career the band experimented with alternative tunings. It wasn’t due to wanting to sound heavier, or to wake the pits of hell, but out of a need for everything to have its place within the dynamics of combining a metal band with symphonies and choirs when bringing everything together in the final mix.

On top of everything that is going on within this album, there’s a maturity within the song writing with the musicians focusing on the song craft and knowing when not to play in order to bring space for the other instruments. There are slick changes in key and tempo, which changes the mood and grab the listener, creating some of the most dramatic music imaginable. There are moments of pure genius that could rival some of the grandest symphonies and award winning movie scores. The performances from the musicians is nothing but impressive.

If pressed to pick some standouts it would be the opening and closing epics The Ninth Wave and Grand Parade for their song structuring and sheer power. Twilight Of The Gods for use of light and shade, and the ballad Miracle Machine for showing the softer side to Blind Guardian. But the albums true shining moment would be Sacred Mind. The structure of this song is brilliant, building up from the mellow and calm to the frantic and powerful. A true journey through a musical landscape which also shows just how damn good this band is. The instrumental section on this song is outstanding. Anyone who knows me knows I’m a Dream Theater obsessive. On this song, Blind Guardian show DT how it’s done.

There’s a lot of metal albums slated for release in 2015. This one is raising the bar to an exceptional height. It’s early, but this is certainly a contender for album of the year.

Ilian says...
WOW! Great interview!!! This is the second review I read something like this for Sacred Mind!!!
Thanks man!

Thanks for reading. Glad you liked it. :-)