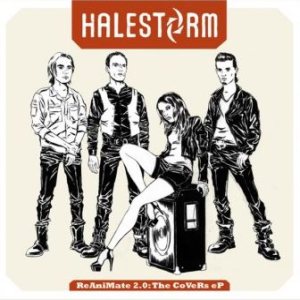 This four piece band from Red Lion, Pennsylvania can be described in one word … impressive. Since 2009 Halestorm, the sister/brother combination of Lzzy Hale (vocals/guitar) and Arejay Hale (drums) with Joe Hottington (lead guitar) and Josh Smith (bass) have released two of the best albums I have heard over the past several years, Halestorm (2009) and The Strange Case Of … (2012). In between those two releases the band put out an EP titled ReAniMated: The Covers EP in 2011, this was a brilliant 6 track CD that took songs from some of the world’s biggest names such as Guns N’ Roses, Heart, The Beatles and Lady Ga Ga and twisted them into their own interpretations. 2013 sees the band going back to the well for another helping with the release of ReAniMated 2.0.

ReAniMated 2.0 follows the same formula that worked so well for the band on the first effort, again you will find 6 cover songs that have in one way or another inspired or shaped the bands musical direction. The opening track is Dissident Aggressor originally recorded by metal icons Judas Priest, this is an interesting choice because most bands would have chosen something more well know from the Priest catalogue, something like Breaking The Law or Living After Midnight. But not Halestorm, they are more than happy to go down the road less travelled and what an outstanding job they do on the track, if Rob Halford ever wants to call it a day the band have a ready made replacement in Lzzy Hale. Once again, like on the first ReAniMated EP, with a Lady Ga Ga cover, the band have included something current, on this record it is Get Lucky by Daft Punk. This is a great, fun, edgy, rock track and sounds like a completely different song from the original, up next is Australian rock at its best with AC/DC’s Shoot To Thrill. I’ve heard a lot of bands try and sing AC/DC songs and fall horribly short, however this is not a problem Halestorm have, this is a really respectful interpretation and I think AC/DC would be proud of it.

As the record continues we find ourselves once again down that road less travelled, as I mentioned before, with Pat Benatar’s Hell Is For Children. This is a track that deals with child abuse and it would have been so easy for Halestorm to cover one of Benatar’s big hits, but instead chose a track that has something of substance to say and their performance of the song is outstanding. Fleetwood Mac’s Gold Dust Woman gets the Halestorm treatment as they add a kind of bluesy feel to the track, while keeping within the boundaries of the original and rounding out the EP is Marilyn Manson’s 1996, personally not a fan of Manson’s but even Lzzy Hale makes his music sound pretty good.

I think these EP’s are a stroke of genius on so many levels. For starters, they keep the bands name out there in between studio releases, further to that it keeps the fans happy while they wait for new original material, I mean, some bands take 3,4,5 years sometimes to put out a new record, this breaks it up a bit and the quality of the track selection and performance is just top shelf work. If you haven’t heard Halestorm, why not? If you are unsure grab a hold of either ReAniMated EPs and if you like what you hear grab a hold of their studio albums anyway you can, you won’t be disappointed.