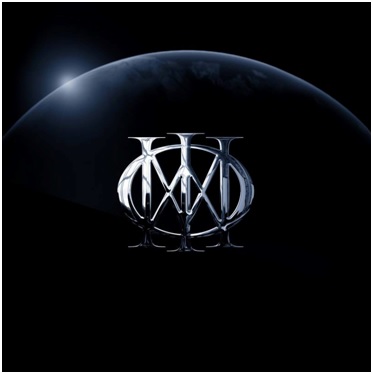 It’s a new beginning as the break of dawn shines upon a darkened world, and upon the familiar symbol that’s branded the eleven previous studio albums from this iconic band. The Majesty logo can only mean one thing - this is the new Dream Theater album, and since the band’s name is nowhere to be found on the cover artwork it’s clear this is an album for the already established fans. Furthermore, this is the album fans have been waiting for. It’s awesome!

During exploration of the artwork within the booklet you’ll find many abstract images, each with the Majesty symbol hidden within, sometimes obvious, sometimes more difficult, but always hinting that these Progressive Metal kings remain the biggest band on the planet that the mainstream has never heard of.

To self-title an album at this point in their career shows their confidence with the currant line up and with the collection of songs they’ve created. It’s a bold statement; indicating that this is what they believe to be the definition of what the band is all about when they have acclaimed albums such as Images and Words (1992) and Scenes from a Memory (1999) to their catalogue.

Dream Theater contains all the band’s expected traits - odd meters, harmonized solos between guitar and keyboard, slick tempo changes, dexterous bass lines and impassioned singing. The most important thing is the perfect balance of light and shade present throughout. There have been previous albums that haven’t been as balanced, creating some mixed opinions from fans. Dream Theater have always fused their influences from progressive rock bands like Rush, King Crimson, and Pink Floyd with metal bands like Metallica, Iron Maiden and Pantera. Some releases have swayed towards the former like Falling into Infinity (1997) and Octavarium (2005) while some were more focused on the later like Train of Thought (2003) and Systematic Chaos (2007) With each album some fans have been disappointed in the direction taken, believing it was too ‘heavy’ or too ‘soft’ but being a ‘progressive’ metal band means that Dream Theater will always be moving forward musically while exploring various areas. No two albums will ever be the same, but what will always be present is the displays of musicianship. With many nods towards the past, while exploring new avenues into the future, this album should please all.

Black Clouds and Silver Lines (2009) while certainly being a good album, lacked some of the magic that had been evident from the inception of the band as ‘Majesty’ back in 1985. In hindsight, perhaps founding member and drummer, Mike Portnoy’s departure in 2010 was evident at this point? All bands who have a passionate fan base are going to hear opinions and debates about what the better line up is, what’s the better era, and whether the band should continue. For me, a band is the sum of its members, but ‘in most cases’ no one member is more important than the band as a whole. So while founding members may leave, the remaining band should continue if they believe it is the right thing to do.

In contrast to the writing sessions for A Dramatic Turn of Events (2011) new drummer, Mike Magini, was involved throughout the writing process of this new album. He joined after the writing for the previous album and therefore recorded his own take on the lines Petrucci had programmed during the demoing process. His contribution brings the spirit of band unity back to the songs and especially the instrumental sections that have made DT so awe inspiring over the years.

The album kicks off with False Awakening Suite, an instrumental set to rival any dramatic score to a movie blockbuster. It’s unmistakably Dream Theater, right down to the fact they squeeze three parts into a run time of just 2:42, possible their shortest track ever. The Enemy Inside contains some heavy seventh string riffing, odd meters, and various sections. Not playing against anything they’ve done before, but doing it better than they have in a while. James LaBrie’s voice is in fine form. The 6 minutes and 17 seconds seem to pass in a moment. A mellow solo runs into some faster guitar / keyboard harmonies, before some DT craziness, and a more expected shredding solo - that doesn’t overstay it’s welcome. The playing on this track is tasteful, never drawing attention to itself for the sake of itself, and seeking to serve what’s needed for the song, not the player’s ego. The Looking Glass clearly shows the bands inspiration from Rush. A mid tempo rocker, with some mellow sections set to be a favorite of ‘old school’ fans. Mid-section jazz lick solo is reminiscent of some of the work on the classic track Learning to Live from Images and Words.

Enigma Machine (Not counting the album opener) is the first instrumental track they’ve done since Train of Thought’s Stream of Consciousness. - Perhaps written to show the new chemistry within the band. The diehard fans who are familiar with the Majesty Demos may find some similarities to their early instrumentals. For the guitarist, Petrucci’s tone is awesome as expected; his heavily riffing and awe-inspiring solos will be sending many aspiring guitarist back to the woodshed. The Bigger Picture contains one of the most beautiful and melancholy piano melodies ever written. Also notable for LaBrie’s vocal performance, showing how his voice has matured with age. He’s still one of the best ‘clean’ vocalist in metal. Once again, some of the shifts in song structure and overall feel of the songs recalls Images and Words. Behind the Veil starts with a slow build intro and kicks into one of the coolest guitar riffs on the album. Jordan Rudess’s accompanying keyboard tone sounds reminiscent of Kevin Moore’s on Awake (1994).

Next up is Surrender to Reason. Another interesting thing about self-titling the album and heavily relying on the imagery of the Majesty symbol on the cover is that a lot of the new direction seems to be set in taking the best of what work in the past. For the first time since Scenes From a Memory (1999), John Myung has a lyrical contribution. Previous to that album he’s had a track on each album. The track also contains some nice clean tone strumming from Petrucci. Along for the Ride is a nice gentle song that builds into a power ballad piece. Every album has had a more commercial sounding track that ‘could’ be a ‘hit’. Having said that, its commercial sound takes nothing away from this being a great song.

Illumination Theory is the epic of the album at 22:18 and while not taking it to the extreme like the second disc of Six Degrees of Inner Turbulance (2001), it does seek to pack in as much as possible. However, the five ‘parts’ seem more strung together then the organic flow that connected the parts within the classic A Change of Seasons (1995) Overall, this track shows the new ‘mature’ incarnation of Dream Theater. Providing a sense of familiarity while at the same time creating something new and building a foundation on which to move forward. It’s no wonder this album is self-titled; this is Dream Theater.