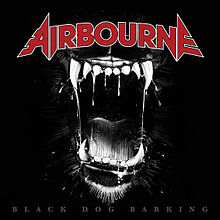 Aussie rockers Airbourne have returned with their third full length album Black Dog Barking and if you are at all familiar with any of Airbourne’s past output and/or live shows, you can undoubtedly expect one thing; pure and unrelenting, breakneck, fist pumping, balls to the wall rock and roll!

If you can say anything about the unashamedly AC/DC worshipping Airbourne and the ten tracks they’ve produced on Black Dog Barking, they know what works for them here and they have perfected it to an art form. In fact, the bar has been set so high on this album that I really can’t see how the band can outdo themselves on their next effort. The production has also been well and truly turned up a notch since 2010’s No Guts No Glory, every riff, lyric and drum beat sounding more polished than ever before.

After a sing-along intro, the self-explanatory first song, ‘Ready to Rock’, sets the tone exactly how rock fans would expect, immediately grabbing you by the scruff of the neck and preparing you for the onslaught that follows.

Familiar below-the-belt themes make a re-appearance on ‘Woman Like That’ and ‘No One Fits Me (Better than You)' and sure-to-be certain party-starters ‘Animalize’ and ‘Firepower’ get the foot tapping and head banging at a frenetic pace.

"Live It Up", the first single from the album, begins with a riff quite reminiscent of “For Those About to Rock’, accompanied by sounds of soaring aircraft and air sirens, lulling the listener into a false sense of security before kicking into what becomes another great rock anthem and perfect choice for first single and music video.

“Hungry” is a definite album highlight for me. Starting with flamenco-style guitar flourishes, it quickly turns into a song much like Motley Crue’s ‘Kickstart My Heart’ but even more lively and energetic, if that is even possible.

Album closer and title track ‘Black Dog Barking’ unrelentingly puts an end to proceedings, not before pummelling the listener to submission with some amazing guitar solos and a chorus you’ll be singing along to long after the song has finished.

It’s almost impossible to dislike the album especially if you’re are a fan of the band but in saying that it is not for the faint of heart either. Unquestionably, it is an album for parties, long road trips and drunken sing-alongs and you will need a large amount of stamina and willpower to stick with it right through to the end. Although if you’re already an Airbourne fan, you will possess these qualities already so press play and set the volume to max; it’s how it should be played and enjoyed. To quote Airbourne when asked about their latest album: “…crank it up, crack a beer and stick some rock ‘n’ roll in your ear!”. Enough said.

Lock up your daughters and hide the keys to the liquor cabinet because Airbourne, fresh from a run of dates on the European major festival circuit, are coming back home in the middle of July for a national tour and are sure to wreak chaos wherever they play, all in the name of Rock and Roll!