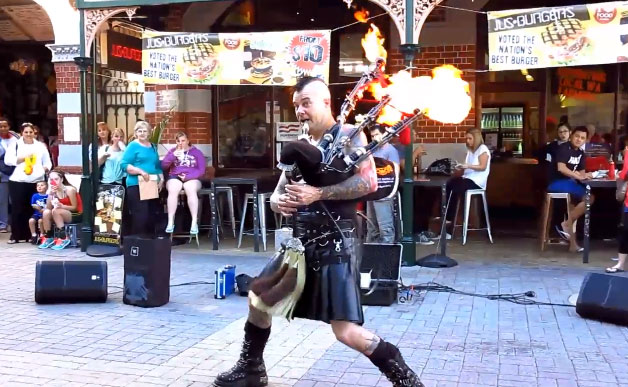 In coolest-thing-we’ve-ever-seen news, check out this Australian maniac perform AC/DC‘s ‘Thunderstruck’ on bagpipes! As proven by Dropkick Murphys, a bagpipe can turn a great song into a phenomenal song, but this dude has taken it one step further, turning his bagpipes in to a homemade flamethrower.

Yes … flamethrower! We have no idea how this is legal, but the pure awesomeness of Cam McAzie (aka the Badpiper) supersedes any written law. According to the Badpiper’s Facebook page, the Perth-based musician has been piping away since 1995 and has released three albums. Since McAzie’s flaming bagpipe version of ‘Thunderstruck’ was posted to YouTube on May 19, the video has been going viral, accumulating over 165,000 views at the time of this posting.

Blown away by the reception to his ‘Thunderstruck’ cover, the Badpiper took to Facebook to share his excitement with his fans.

So apparently a thunderstruck street video is going viral in the United States, made it onto breakfast tv or something !! Hopefully Im gonna Blow up in a big way now !!

This viral video has spread so far and so wide , Im not a very good tech guy so if anyone has any info on how far this has reached please let me know !! And a big welcome to all the new fans, welcome aboard !!

Finally, the Bagpiper has now set his sights on performing for The Late Show with David Letterman:

Check out Cam ‘The Badpiper’ McAzie’s scorching performance of AC/DC’s ‘Thunderstruck’ in the video here: