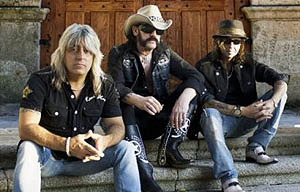 Motorhead cancelled their appearance at Austria's See-Rock festival and their planned June 25 date in Milan, Italy due to a health issue involving frontman Lemmy Kilmister.

According to Soundsblog.it, Lemmy suffered an unspecified haematoma. The news comes after the revelation in Classic Rock magazine that Lemmy recently had a defibrillator fitted to help his heart to beat normally, after experiencing heart problems in recent times.

Motorhead's new album, Aftershock, is due around September. It was recorded at Maple Sound Studios in Santa Ana, California with producer Cameron Webb (Pennywise, Megadeth, Zebrahead) and will feature 13 songs including Dust And Glass, Knife, Going To Mexico, Lost Woman Blues, Death Machine and Heartbreaker.

Motorhead's last album was 2010's The World Is Yours. At the time, Lemmy told me "There doesn’t seem to be an overall theme to the album except anger, you know? We easily do them sort of songs. Angry is good for ya. Gets the old synapses crackling, y’know?"

I'm sure the whole rock world will join me in hoping Lemmy gets well soon.