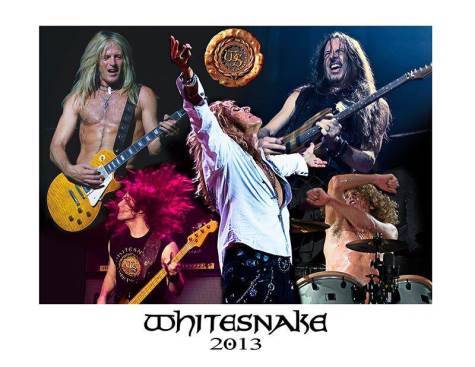 Fan-filmed video footage of WHITESNAKE's June 21 performance at Hellfest in Clisson, France can be seen below.

Regarding WHITESNAKE's upcoming touring plans, the band's mainman and lead singer David Coverdale recently told the Coventry Telegraph, "I absolutely love being at home with my family, so it has to be something exciting to get me out of my house. I enjoy performing, but the travelling sucks on ice. I am treated very nicely when I'm on the road these days, but if you could beam me to Birmingham or wherever, I would love it."

On the topic of WHITESNAKE's co-headlining tour with JOURNEY, whose hits include "Don't Stop Believin'", "Any Way You Want It" and "Faithfully", with the added attraction of English hard rockers THUNDER, Coverdale said: "JOURNEY I have known for decades. The difficulty of having a co-headliner is to find someone with an equal number of familiar songs, so that you give audiences more bang for their buck. In these difficult times, the more you can offer for the price of a ticket the better, I feel. And JOURNEY have a lot of great songs. As for my dear friends THUNDER, (guitarist and songwriter) Luke Morley has put the band back together specially for this tour."

Frontiers Records will release WHITESNAKE's "Made In Britain/The World Record" in Europe on July 5 and in North America on July 9. The album will be released in Japan on June 19 via Ward Records.