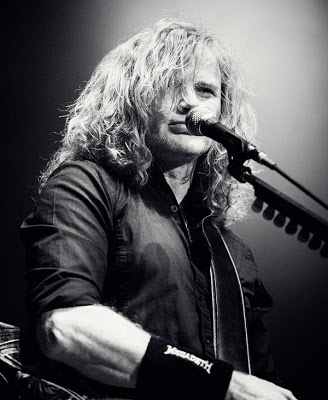 The commercial features Mustaine narrating the story of a young metal fan named Keith preparing for a job interview; in need of something to psyche him up for the session, he heads to Megadeth Wearhouse to pick up the band’s new album, “Super Collider.”

The spoof is inspired by an incident the Megadeth leader had with the retailer last December.

“A few days before Christmas I purchased a gift certificate from the Men’s Warehouse in Salt Lake City, Utah as a gift for our awesome tour manager Jim Carroccio,” wrote the guitarist on December 29. “You know the Men’s Warehouse…the old geezer with the voice that sound like he has chain-smoked since he was a fetus; the one that espouses, “I absolutely guarantee you’re gonna like the way you look,” or some manure like that, right?

“Well, I was talking to Jim today and wondering why he didn’t say anything (I think we all wonder sometimes when our loved ones or friends get gifts if they actually like them) and it turns out that they decided to hold my order, otherwise called by them as “pending,” and told no one. For almost 9 days now I have been waiting for delivery of this gift certificate, and I wouldn’t say anything because it IS the holidays, but these salesmen promised that they would GUARANTEE a two-day delivery of the certificate to Jim (it seems they throw this word GUARANTEE around quite a lot).

“So, we called and asked what happened and they have no explanation whatsoever, they didn’t care, and when we asked if they were going to do anything to remedy this, they made no effort whatsoever for this mix-up…although they did promise me the same GUARANTEE that they gave me when I bought it; that is that they will send it “two-day delivery,” but I already was promised this. Maybe they mean 12 day delivery.

“I really think that it sucks when people make false claims, that they don’t care to make good on a problem that is clearly their fault, and with all of the “ABSOLUTELY GUARANTEE IT” crap I just had to say something. We are all living in very tight financial times right now, and like I said, you may not wear a suit for your job or for an event or occasion, but if you do, I would strongly recommend you wear someone else’s suits. Go to Jos. A Bank instead. I for one, will never set foot in a Men’s Warehouse, even for shelter from a blizzard. I absolutely GUARANTEE it.”

Men’s Wearhouse responded to Mustaine's post, writing “Dave, thanks for reaching out to us on Facebook. We apologize for the delay in receiving your gift card and agree that the delay is unacceptable. We’re here to help. Email us MWListens@tmw.com"

Megadeth are geatring up for the launch of their own festival, Gigantour, on July 3rd in Gilford, NH; joining the band will be Black Label Society, Device, Hellyeah, Newsted and Death Division – all personally picked by Mustaine.

Check out the video here: