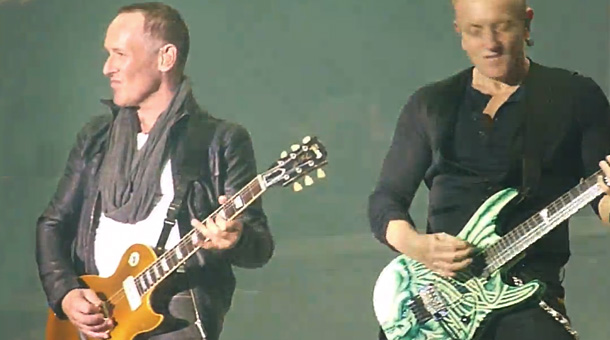 Def Leppard kicked off their 2013 summer tour at Hellfest in Clisson, France on Friday as guitarist Vivian Campbell continues his battle with cancer. The guitarist debuted a new close-cropped haircut required by his chemotherapy at the show, the first of a month-long series of dates.

Campbell recently revealed that he has been diagnosed with Hodgkin's Lymphoma, but that he is committed to his touring schedule with Leppard and Last in Line, the reunited Dio band lineup.

"6 months of chemotherapy is the prescribed treatment," wrote the guitarist. "I'm about 2 months in and feeling rather spiffy, all things considered. Hodgkin's has an over 80% cure rate, so by my reckoning, if you're going to have a cancer, Hodgie's is the one to have!"

"Thank you to all who have offered support; I'm very, very touched by that," Campbell posted following fan reaction to the news. "Be assured, however, that the Last In Line shows will still be happening in August - I have no intention of letting cancer slow me down. I look forward to seeing you all then."