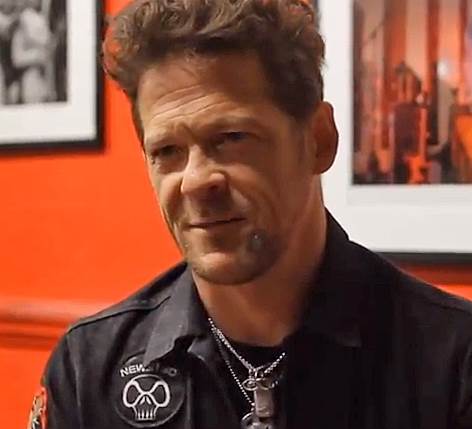 Hit The Floor conducted an interview with former METALLICA, VOIVOD and FLOTSAM AND JETSAM bassist and current NEWSTED frontman Jason Newsted prior to NEWSTED's June 12 performance at 100 Club in London, England. You can now watch the chat below.

NEWSTED's full-length debut, "Heavy Metal Music", will be released on August 6 in North America via Chophouse Records/Collective Sounds and August 5 in Europe through Spinefarm Records. Jason told Billboard.com the 11-song album will be very similar to the band's debut EP, "Metal", which sold around 6,200 copies in the United States in its first week of release to land at position No. 62 on The Billboard 200 chart. "The EP was always intended to be the primer, a sampler of what was to come on the LP," he said. "It's all metal all the time. It's not all fast, but it is all heavy."

07. King Of The Underdogs

09. Twisted Tail Of The Comet

NEWSTED has been confirmed for this year's edition of Gigantour, the critically acclaimed package festival founded in 2005 by MEGADETH mainman Dave Mustaine. Also scheduled to appear on the bill are headliners MEGADETH, along with BLACK LABEL SOCIETY, DEVICE, HELLYEAH and DEATH DIVISION.

NEWSTED kicked off its first-ever U.S. tour on April 19 at Red House in Walnut Creek, California. The 14-date trek concluded on May 23 in Asbury Park, New Jersey and has led into a number of European festival appearances for the band, which is rounded out by STAIND guitarist Mike Mushok, drummer Jesus Mendez Jr. and guitarist Jessie Farnsworth.