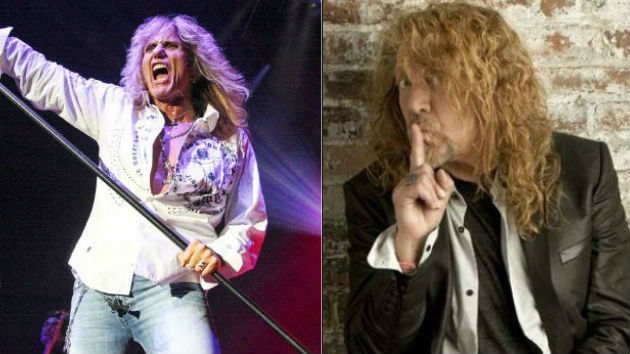 David Coverdale says he’d like to end his 20-year-old feud with Led Zeppelin‘s Robert Plant. What feud, you may be wondering?

Apparently, it began after the Whitesnake singer released a well-received one-off album with Zeppelin guitarist Jimmy Page, Coverdale Page, in 1993. According to ClassicRockMagazine.com, the quarrel began after Plant took some digs at Coverdale, whom he referred to as “David Cover-version.” David, in turn, hit back with some barbs of his own, at one point telling the press of Plant, “I wouldn’t send him cat food if he was starving.”

In a new interview that’s set to air this week on U.K. digital radio station TeamRock Radio, Coverdale reveals he’d now like to bury the hatchet with Plant. Coverdale explains that the last time he saw Page, he told him, “I’d love to buy Robert a drink,” and asked the guitar legend to “offer my sincere regrets for any negative things I’ve ever said, which were mostly defensive.”

David also declares that he holds Plant “in the highest esteem as a human being, as an artist, and I really would like to…buy him a drink, shake hands and say, ‘I’m really sorry…Can we be friends again?’”

Coverdale expresses confidence that Page will pass along his message, while also admitting that Plant “might go and tell him to [expletive] himself.” Regardless of what Robert’s reaction might be, David says, “I don’t hold any animosity, just disappointment in myself that I took the bait and ran with some ugly things. Because it’s not appropriate for somebody I respect so much.”